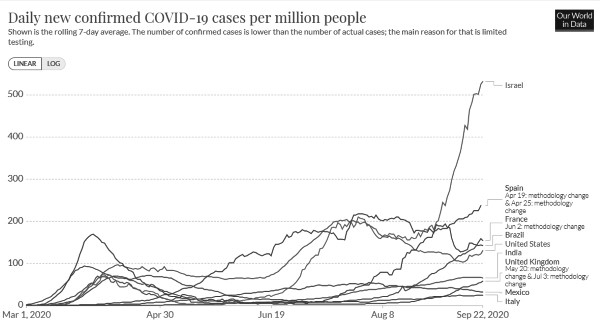 This morning (Wednesday) Israel’s Health Ministry announced that in the past 24 hours there were 6,861 new cases of Covid-19 detected in 59,169 tests, an 11.5% positive ratio. This ratio has been steadily increasing, which is an indication of the explosive spread of the disease.

This is the worst ever for Israel, which has had the greatest average number of new cases per day per million population in the world for several weeks now. The Health Ministry’s “point man” on Corona, Dr. Ronni Gamzu, predicted that within a week the number of serious cases that require hospitalization will exceed the capacity of the system. When that happens, the system will stretch a bit. One hospital converted a parking garage into a Corona facility in a remarkably short time; the IDF is setting up field hospitals. But if the numbers continue to increase, soon there will be no more flexibility. Doctors will have to decide whom to treat and whom not. People will die who could have been saved.

Last week Israel began a second partial lockdown. Its effect will not be felt for another week, but it’s doubtful – based on the various loopholes left in it for political reasons and a general lack of observance of the rules – that it will be enough to reduce the spread of the disease significantly.

There is a lack of good information available about how to reduce the number of infections, but it seems clear that crowds are bad, crowds indoors are worse, and masks – if properly worn – help, especially if both the infectious person and the one at risk wear them. It also seems that the amount of virus that a person picks up can affect whether they will be infected and how seriously; so the amount of time spent in a dangerous situation is important.

The strategy (as it appears today) of the Health Ministry is to apply restrictions to reduce the daily number of new cases to the point that it will be possible to track the contacts of each infected person, test them, and quarantine anyone who is positive or who has had direct contact with someone who tests positive. That is called “breaking the chain of infection.” But that can only happen if the number of new cases is manageable. Once that is achieved, it should be possible to gradually release the restrictions and return the society to normal without causing a new spike in infections. Estimates of how low it must go vary widely, between 100 and 1000 new cases per day.

The objective in applying restrictions is to restrict those behaviors that facilitate the spread of the virus as much as possible, while doing the smallest possible damage to the economy. And here we run into the problems of politics and attitudes.

Yesterday and today the “Corona Cabinet” – a committee of government ministers from relevant ministries – has been discussing the tightening of restrictions that will be needed. One of the biggest conflicts concerns two activities which involve large crowds, including numerous people without masks who do not observe “social distancing,” and which have zero impact on the economy. It would seem obvious that these would be the first to be restricted.

But the activities we are talking about are the weekly raucous, theatrical, and sometimes obscene demonstrations outside the Prime Minister’s residence in Jerusalem, and his home in Caesarea; and the coming synagogue services on Yom Kippur.

The Left believes that there is nothing more sacred than the right to demonstrate. An attempt to shut down or even limit the numbers of demonstrators is met with fury on the street and from opposition politicians. It’s claimed that would “destroy democracy.” The Attorney General, who in Israel is more a functionary of the legal establishment and the Supreme Court than of the government, says that the government would have to get the Knesset to pass a special law if it wants to stop demonstrations.

Observant Jewish Israelis, of course, insist that it is unacceptable to forbid Jewish prayer in a Jewish state. And both sides are right, but they are both wrong in their insistence that they get their way in the face of the fact that both demonstrations and packed synagogues are known to effectively spread the virus.

The tracking mechanism of the Internal Security Service (Shabak) that is being used to track exposure and locate people violating quarantine is ineffective in these cases, since both demonstrators – just for that reason – and synagogue-goers leave their cellphones at home.

The government could not stand against the pressure, so it punted and appointed a “professional” committee to come up with limitations on demonstrations and public prayer that would allow both to continue. Unfortunately, these rules will be broken, because a large segment of each group does not respect any rules that come from the government. The police are outnumbered, and even though they can impose fines, have a hard time enforcing rules – and the more complicated they are, the harder it is.

Much of the Haredi educational system is operating, including schools for children and yeshivot and kollelim for adults, despite the closings decreed in “red zones.” Limits on the number of congregants in synagogues were widely broken during Rosh Hashana. Dozens of anti-Bibi and anti-lockdown protestors set up tables in front of the PM’s residence and had a festive meal. Over the weekend, a large group held what was essentially a beach party, allegedly under the rules permitting “demonstrations.”

In the Arab towns on both sides of the Green Line, the problem has been massive weddings, which sometimes go on for several days with hundreds, sometimes thousands, of participants. Mayors of Israeli Arab towns imposed nighttime curfews, which may have helped, although weddings are then sometimes held during the day.

In anything less than a Chinese-style totalitarian system, laws are upheld primarily by the willingness of citizens to obey them, with enforcement only needed for egregious violators. That mechanism is breaking down in Israel. A recent survey showed that 68% did not trust PM Netanyahu to manage the response to the virus, and 41% did not trust Dr. Gamzu. And Israelis tend to ignore people and rules that they don’t respect.

This is literally a question of life and death, both for Israelis and for their economy. A two-or-three week lockdown is bad enough, but two or three months would be intolerable. Either we get a handle on this epidemic, or we will be facing the choice between economic disaster or hundreds of deaths every day (today there were 31). Or if we are indecisive enough, maybe we’ll get both.

What needs to happen is that the government has to make simple rules, stick to them, and enforce them with severe penalties. No demonstrations, period. Close the synagogues, period. No weddings, period. In a few weeks, we can break the back of the epidemic, and then return to something closer to normalcy.

Continuing to take two steps forward and three steps back as we’ve been doing will only earn us a bunch of funerals – and no economy, either.