Seventy two years almost the day since the hanging of Shafik Ades in Basra, Iraq, a letter has come to light which corroborates his activities as a scrap metal merchant – and not, as charged by the Iraqi authorities, a weapons smuggler working for the Zionists.

The letter, from the A & C Ades Company, states that a car was donated to the community for the use of the Hevra Kadisha (Burial Society) for the transport of the dead. The letter, dated August 1946, was found in the Iraqi-Jewish archive, a collection of materials confiscated by the Iraqi secret police from the Jewish
community and now in the US. 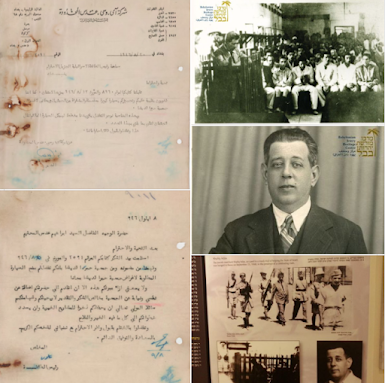 The two letters referring to the gift of a car made by the Ades Company to the Burial Society. Right: Shafik Ades (photos: Babylonian Jewry Heritage Center)
“We are proud to comply with your request and provide you with a large second-hand car purchased from the British army,” the letter read. The archive also contains a response from Hakham Sasson Khedouri, chief rabbi of the community, thanking the Ades company.
The existence of the letters was revealed by the Babylonian Jewry Heritage Center in Or Yehuda, Israel.
Shafik Ades had thought that his wealth and connections with the royal family had made him immune to false accusations.
Ades’s hanging on 23 September 1948 sent shock waves of terror through the Jews of Iraq and was probably the single most important reason why90 percent fled the country, when emigration became legal in 1950.
More about Shafik Ades