On 3 June this year the Australian Jewish News (AJN) carried an article by long-standing staff member Peter Kohn concerning cancellation of Its 3 June 2016 issue reported that one of the sessions scheduled for the two-day Limmud Oz’s session in June had been cancelled.

The session was to feature a representative of the highly controversial Australian Jewish Democratic Society (seen by many if not most of the mainstream Jewish community as odious in its stance) and Adelaide University Professor Bassam Dally (pictured, forefront, left), an Israel-born Palestinian Arab who’s vice-president of the Australian Palestinian Advocacy Network.

He, Kohn”s article (citing the website of the Coalition for Justice and Peace in Palestine) informed readers, is on record as declaring:


“I support support BDS because, unlike governments, the conscious [sic] of millions of people cannot be bought by rich interest groups.  Without international pressure, Israel will never agree to a Palestinian state.”

Having been contacted by the AJN regarding the cancellation, Professor Dally is reported as stating:


“It’s ironic that Limmud Oz organisers have decided to disinvite me speaking in a session titled ‘Fighting for Coexistence’. The session was never intended to be about BDS and, therefore, the organisers are deciding not only what, but who, their audience may be permitted to hear – in my case, an Israeli citizen of Palestinian heritage.

This shows a contempt for the maturity and intelligence of the Jewish community by preventing them from having these important discussions in an open and civilised manner.”


“On publishing the program, we were alerted to the extent and tone of the position of one of the participants on BDS.  The decision was made on principle, given the goals of global BDS, the damaging effect of BDS rhetoric in the community, and the anti-engagement nature of BDS, to cancel the session in line with our programming policy.”

The chairman of the B’nai B’rith Anti-defamation Commission chairman, Dr Dvir Abramovich, was quoted as observing:


“Limmud Oz did the right thing by making it clear that it will not give its endorsement and sponsorship to the session, The BDS movement its corre, is anti-Semitic.” [sic: The AJN, for reasons best known to itself, persists in spelling antisemitism the old, discredited, old-fashioned way.]


“It is absurd to expect a Jewish community organisation, even one committed to the robust exchange of ideas, to extend the welcome mat to a supporter of the boycotting of Israel, as to do so may confer a degree of legitimacy on someone whose record and views do not further the cause of mutual coexistence, genuine peace or communal harmony.” 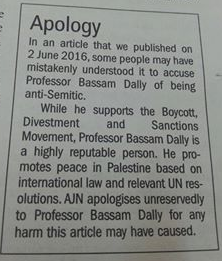 Evidently, someone felt that the references to Professor Dally in the article reflected him in an unjustly bad light, for in the current issue (22 July), at the end of the correspondence columns, is an ungrammatical and badly-written apology which appears to have been composed in such a panic that even the date of the issue carrying Kohn’s article is incorrect.


“In an article that we published on 2 June 2016,some people may have  mistakenly understood it to accuse Professor Bassam Dally of being anti-Semitic.”  (Is this what passes for good journalistic English these days?!)

I would not have interpreted the Kohn article as implying that Professor Dally is personally antisemitic, but clearly my perceptions are not shared by everyone.

Certainly not by these two leftist Jewish critics of Israel, Brull and Stillman:

It’s a pity, though, that the AJN did not choose a different phrasing and entitle it a “Clarification”.  For the trouble with that abject apology, in that particular wording, seems to me to be that
the paper won’t be able to argue that BDS is antisemitic without looking like prize shmendricks.   Why the ill-judged prose?  They’ve set a precedent. They can be seen as endorsing UN resolutions against Israel, however unjust such resolutions, and undermining fellow-Jews and Israel-supporters who insist that BDS is antisemitic.

Meanwhile, in the dear old Mother Country, the odious Spinning Jenny has been spreading her poison again.

See, for example, here and here.

Among those liking the Baroness’s speech and subsequent defiance are a certain Andy Taylor (whose numerous posts on Facebook leave little doubt of his feelings towards da Joos), as well our old friend the vicar of Virginia Water, Stephen Sizer, as yet, since his return to Facebook following banishment by his bishop over that notorious Israel and 9/11 post of his, venting his hostility to Zionism through pressing the “Like” button on other anti-Zionists’ proclamations rather than pontificating himself:

Not that Her Ladyship is getting it all her on way on her Facebook page.  Some dastardly Zionists have the temerity to be fighting back! (And how!)