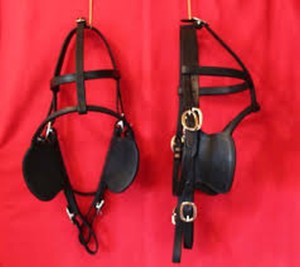 Hertzliya, July 26 – Israeli manufacturers of devices meant to restrict the vision of the wearer have noticed a marked uptick in sales of their products to countries recently experiencing increased terrorist attacks by Islamists, an industry representative said today.
E-Ver Enterprises, a trade group, said that since the terrorist attacks in Paris two years ago, Israeli sellers of blinders have seen a 700% increase in exports of those items to France, Germany, Belgium, and the US, with smaller but noticeable increases in the Scandinavian markets.
Sanve Rim, President of the trade group, told reporters that the sharp increase reflected increased demand for blinders that fit the human head, as opposed to the variety designed for horses, which until recently had accounted for the bulk of sales worldwide. “We were fortunately well placed to take advantage of this emerging market,” explained Rim. “Industry analysts keenly predicted the need in certain countries for devices to eliminate direct awareness of phenomena that might distract from a specific, narrow perspective on events.”
Specifically, he noted, the analysts foresaw how the political leadership of the Western countries directly targeted in Islamist terrorist attacks would struggle to maintain the view that the attackers do not represent a global movement that must be recognized in order to be defeated. “Our chief competition is the shovel industry, but fortunately for us, they were slow to react to this emerging trend,” he said. “Besides, blinders are a much more efficient and portable solution for these purposes than burying one’s head in the sand, which requires an investment of time and effort. It’s fine for people or institutions with no expectations of moving anywhere, and there’s little chance of misplacing a hole, but overall there’s a bigger market for blinders than for shovels in this regard.”
Rim said he and his colleagues expect demand to remain steady at the current elevated levels for at least two years. “I can’t see change happening anywhere anytime soon, except maybe Britain,” he predicted. “None of the countries currently importing blinders at unprecedented rates have shown any indication that they intend to change course. What I think we can expect, though, is that other Western countries will similarly increase their purchases of blinders – I’m thinking of Austria, for example, as well as Greece, Italy, and Spain.”
Concurrent with increased demand for blinders in the West, Rim identifies the opposite trend in the Arab world, with countries such as Saudi Arabia gradually decreasing its reliance on anti-Israel blinders. However, he notes, Israel has no formal trade relations with most of those countries, and therefore its export of blinders is not expected to suffer as a result.