A play, Wael Zuaiter: Unknown, currently showing in Melbourne, which romanticises a terrorist, was reviewed in the Fairfax media.

… this innovative and brilliantly constructed piece of documentary theatre achieves a haunting power through storytelling.

Its central story is the assassination of Wael Zuaiter. A Palestinian intellectual living in Rome, Zuaiter was killed by Mossad agents in the wake of the Black September terrorist attack in which 11 Israeli athletes were taken hostage and eventually murdered at the 1972 Munich Olympics.

Documentary maker Jesse Cox has a family connection. His great aunt, the Australian painter Janet Venn-Brown, was Zuaiter’s fiancee at the time of his death. Her voice, the voices of Wael’s family, of an artist inspired by killing and of an Israeli journalist and ex-intelligence agent, all join with Cox’s to tell a tale that, for all its personal dimensions, opens out to embrace the turbulent history of Palestine.

The piece is framed by the fable of Scheherazade, the wily vizier’s daughter who saved herself and her country from a cycle of murderous violence by telling stories for 1001 nights. In a poignant detail, Zuaiter had a copy of the Arabian Nights in his pocket when he was killed (he was translating it into Italian). A bullet pierced its pages to the spine.
http://www.smh.com.au/entertainment/theatre/moving-insight-into-a-killing-20140501-37kqm.html#ixzz30bA8c4qT

So an obscure Australian painter, Janet Venn-Brown, was the girlfriend of Zuaiter, described as a ‘Palestinian intellectual’. She’s not the first literary or artistic type to flirt with terrorism and fascism. The aristocratic UK Mitford sisters were a prime example. Unity Mitford was an ardent admirer of Nazism and became part of Hitler’s inner circle of friends, while her sister, Diana, married Oswald Mosley, the leader of the British Union of Fascists.

What is puzzling is why the reviewer calls it a piece of “documentary theatre”, which implies it is factually accurate, when it could more aptly be described as a fantasy or even a piece of pro-Palestinian propaganda.

Wikipedia tells us more about Zwaiter. 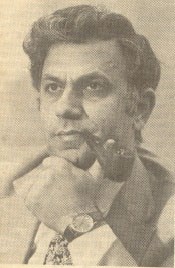 Wael Zwaiter was a Palestinian translator assassinated as the first target of Israel’s Operation Wrath of God campaign following the 1972 Munich massacre. Israel considered Zwaiter a terrorist for his role in the Black September group, while his supporters argue that he was “never conclusively linked” with Black September or the Munich massacre and was killed in retribution.

Zwaiter was the PLO representative in Rome. During his time in Italy, he was in the process of translating One Thousand and One Nights from Arabic into Italian…

Zwaiter was held for questioning by Italian police in August 1972 in relation to a bombing by the group Black September against an oil refinery, but was later released. The Israeli Mossad suspected him of being the head of Black September in Rome, and put him on an assassination list after Black September’s attack in Munich. When he returned to his apartment building on the night of October 16, 1972, he was shot 11 times by two Israeli agents, killing him.

Zuaiter has previously been the subject of adulation by the literati. In 2008, Emily Jacir, an  American Palestinian artist, received the prestigious Guggenheim Hugo Boss award for her artistic work – an installation about the life of Zwaiter.

Emily Jacir, who lives and works in New York and Ramallah, was awarded the seventh biennial Hugo Boss Prize, which was established…to recognize and support significant achievement in contemporary art. Combining the role of archivist, activist, and poet, Jacir creates poignant works of art that are at once intensely personal and deeply political. Her work often addresses the circumstances of the Palestinian community, but also highlights the general condition of exile and the negotiation of tenuous borders as she focuses on the mundane details of everyday life as well as momentous historical events.

This exhibition brings together two installations that address the October 1972 assassination of Palestinian intellectual Wael Zuaiter in Rome by Israeli secret service agents following the deadly kidnapping of the Israeli delegation of athletes and trainers to the 1972 Munich Summer Olympics by the Palestinian militant group Black September (to which Zuaiter was never conclusively linked). Material for a film (2006) presents a memorial to one of Zuaiter’s thwarted aspirations: the translation of the centuries-old collection of Arabic stories One Thousand and One Nights into Italian. A bullet pierced a copy of volume two of the ancient classic that Zuaiter was carrying when he was gunned down. For this installation, which was first shown at the 2006 Biennale of Sydney, Jacir …created a haunting mausoleum that, in the artist’s words, “is a memorial to untold stories. To that which has not been translated. To stories that will never be written.” In Material for a film (2004), Jacir culls items from Zuaiter’s personal effects, including photographs, books, correspondence, and music, along with other ephemera to create an intimate portrait. Jacir sought out his friends and family, as well as the places Zuaiter lived and frequented, in order to present a chronicle of his life, work, and passions.

The titles of these works are derived from a chapter by filmmakers Elio Petri and Ugo Pirro of the 1979 collection of essays, poems, and memoirs For a Palestinian: A Memory of Wael Zuaiter, edited by Janet Venn-Brown… Jacir has continued the project, conducting her own interviews and research, and in Material for a film she has constructed a narrative, presented through her arresting use of material and space.

Surely awarding prizes for such ‘artwork’ lends legitimacy  to the PLO terrorist massacre of the 11 innocent  victims of the Israeli Olympic team in Munich 1972. To present Zuaiter as an intellectual, and a victim of Mossad’s desire for revenge, rather than, at the very least, an enabler of the massacre, is intellectually dishonest and amounts to pure propaganda. The judges admitted that Jacir’s work was

“ It is the refined sophistication of Jacir’s art and the relevance of her concerns—both global and local—in a time of war, transnationalism, and mass migration that led us to award her the 2008 Hugo Boss Prize’.”

It seems they felt her concerns for the welfare of the Palestinian cause justified the atrocities committed by the  Black September terrorist group. There is no doubt Jacir views Zuaiter as an intellectual and a hero of the ‘resistance’, rather than a cold blooded killer and that her sympathies lie with the terrorists who carried out the Munich massacre. She shows no compassion for the Israeli victims or their grieving families; they are depersonalized and irrelevant to her narrative. Her only reference to the Israeli side is when she mentions Mossad – as bad men who killed  the ‘good’ Palestinians .

In their book, The Terrorist List,  Edward F. Mickolus and Susan L. Simmons (page 328), shed more light on Zuater as the Fatah representative in Italy. Born in Nablus, Jordan, employed as translator for Libyan Embassy. The Jordanian Embassy claimed he was a nephew of Jordan’s Ambassador in Beirut, but declined to confirm reports he was second cousin of Yasser Aarafat. He was questioned in connection with the attempt by two Jordanians to blow up an Israeli airliner in August 1972. Israel claimed he worked for Black September (BSO) and was their chief in Italy and responsible for the hijacking of a Rome-Tel Aviv flight to Algeria in 1968 and for the explosion of a bomb on an El Al B707 in August 1972. He had been a public apologist for the Munich attack, claiming the Israelis had plotted to have the hostages killed so they could gain world sympathy.

It seems odd that Melbourne should showcase this play as part of their Next Wave Festival, but maybe a quick perusal of their website explains it. One of their goals is to

“Change the future of Australian art by empowering cultural and ability diversity across all our work”.

So by setting a goal of “cultural diversity”, do they rule out anything that accords with mainstream societal norms? As for “ability diversity”, that presumably means they encourage mediocrity so long as it fits in with their ideology.

They embrace “the energising force of a new context, environment or idea as key to transformation. We seek change within the professional practice of individuals, as a pathway to the development of society. We see collaboration as necessary resistance, a mirror … We support what is attempted over what is achieved. Multiple, radical perspectives are celebrated; complexity is embraced. We maintain a focus on the edges of society as the place from which the new must emerge.

So it seems it’s not the quality, but the radical nature of the work that is important – which I guess is why they chose this play. If your tastes include radical chic, here’s still time to catch this performance, which runs till 11 May.