It is not often I am shocked. I have been working through the opening section of a school textbook that is used to teach 16-year olds in the UK about the Arab Israeli conflict. It is part of the GCSE curriculum.

The Zionist Federation brought this to my attention a few days ago. The ZF provided me with the textbook along with some of their own comments and I said I would take a look. The short downloadable report and contains a summary of what I found inside. The ZF comments are also included.

I can begin by saying that the fact this textbook is part of the Pearson Library and is taught inside British schools is utterly shameful. The central messages are those that you would find inside an anti-Israel propaganda book. It is carefully constructed and far more subtle, but the longer you read – the angrier you become. How many children inside state funded schools have been exposed to this type of indoctrination? Someone somewhere needs to explain how this is even possible.

There is nothing right about this textbook. Nothing.

The book is part of the Edexcel International GCSE range. Edexcel are owned by Pearson. It appears to be an option in the History GCSE. The title is ‘The Middle East: Conflict, Crisis and Change’, 1917-2012. The book is also available on Amazon. I found excerpts from this book everywhere. With all the authority of a school textbook – who would question its legitimacy?

The author is Hilary Brash, a teacher from Wycombe. The Series Editor is Nigel Kelly.

I suggest contacting whoever needs to be contacted. This book has NO PLACE inside a classroom. It is poisonous – it rewrites history – it whitewashes anti-Jewish violence – and every child who has studied from it – has been exposed to hard-core anti-Zionist revisionist material. Faithfully delivered to them by their teacher, their school and the taxpayer.

‘In August 1929, angry clashes occurred over holy sites in Jerusalem. These grew into 4 days of bloody riots and mob violence throughout Palestine, leaving 133 Jews and 116 Arabs dead.’

That is how the ‘school’ book describes the bloody massacres of Jewish communities as Arab mobs ran riot throughout Mandatory Palestine. As ‘Arab / Jew’ clashes:

The comparable fatality count is more than deceptive. The reason 116 Arabs died, is because the British killed them as they tried to stop them massacring Jews.

From the opening sentences, when the book called Jewish people 3300 years ago ‘settlers’ until the final chapters – it is almost impossible for the untrained eye to pick apart fantasy from fiction.

The book spends three pages explaining the Oslo Peace process – and then asks the students to explain the failure of the process – but never once mentioned the exploding buses in Israel’s streets – and only mentioned a single terror attack during this period. How can a student possibly explain the failure of Oslo if you don’t mention the 100s of Israelis slain in Israeli streets?

The book doesn’t avoid violence. Whilst the book drums Jewish violence into the heads of students – through repetitive use of keywords such as ‘Irgun’, Lehi’, ‘the King David Hotel’ and ‘Deir Yassin’ – The Mufti of Jerusalem – a man responsible for much of the violence in the 1920-1939 Mandate – is not mentioned anywhere in the book. Not once. How can you write a history of the conflict without mentioning the Mufti? Perhaps the dozen or so references to Deir Yassin or the Irgun didn’t leave enough space.

A textbook of Unforgivable bias

There are images throughout the book – such as:

Not a single image shows the devastation on Israel and Israelis. Not one. There was no room for an image of a burnt-out bus, or the damage Hezbollah did to civilian housing. From the images alone you might gather that the Arabs posed some threat – but thankfully nobody ever died from it.

It is impossible to know where some of the text comes from. There is a claim that 25000 Arabs joined the British army during WW2. This appears to be an outrageous claim which is at least double even the high-end estimates. Whist the book was busy trying to tell students that Arabs and Jews both joined the allied war effort in equal number – no mention was made of the Palestinian leadership’s alliance with the Nazis.

Some of the text even seems sourced from Wiki. Which would be outrageous for an academic textbook. I really hope this is not the case, but the examples provided in the report do raise serious concerns.

Beyond all acceptable norms

It is wrong to describe this as a textbook, and some of the distortions and omissions are beyond all logical understanding. Most of the damage is done in the early pages. Anti-Israel feeling works like a computer virus inserted into the base code. If you can shape the way the initial history is viewed, then you no longer need to worry how that person will see the defensive barrier or the blockade on Gaza. This is something anti-Israel activism has long understood, and whilst pro-Israelis spend most of their time justifying a clampdown on Hamas – anti-Israel activists are revising the timeline of the 1920s and 1930s. They know how this works.

There is no point listing every error. It would take a year to completely unpack a textbook such as this. The report chiefly deals with errors in the first chapter. I have just opened a random page and found additional errors in the description of the 1948 war. The book suggests the Israelis ‘broke the truce‘ after the first phase – which left it able to suggest that ‘once again, Israel broke the truce early‘ at the start of the third. Which would be fair if it were true. But Egypt launched a surprise attack on the 8th July, which renewed the hostilities and opened the second phase. (Morris, 1948 p273). Which once again begs the question – what is the source material for this book?

The manipulation of students

The book continues in similar fashion, Israel are always looking for the ‘excuse’ to fight. Students are manipulated through imagery, misleading maps and distorted statistics. The book’s exercises and suggested activities are all designed to reinforce the story the book is clearly trying to tell. During the Arab anti-British violence, the focus is on Arab victims and the unfair and harsh British attitude. When the Jewish people were violent, sympathies are switched. Suddenly the focus becomes the British victims. The book creates a hierarchy. Arabs>British>Jews. Through the provided exercises, the students are forced to swallow it. When the book wants to get its message across, it really is not shy about how it does it: 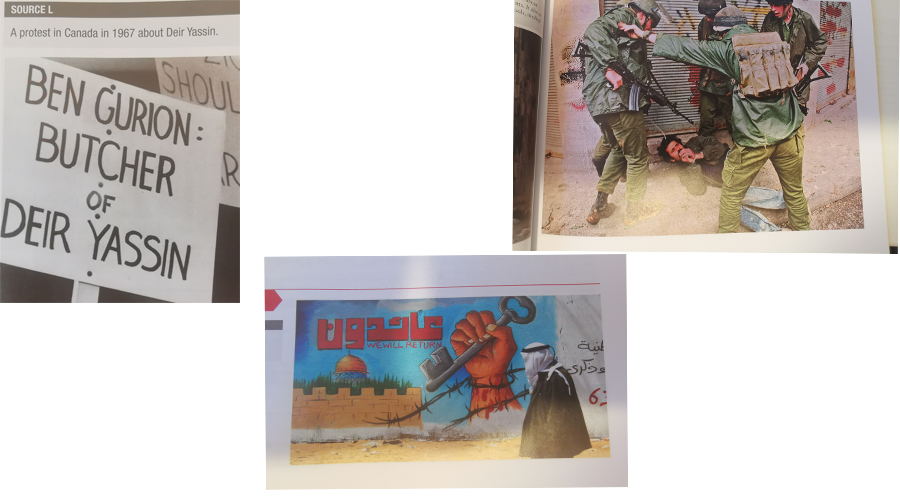 The distortion is all one way. As are the errors. This book fails the David Irving test. A book that is simply sloppy would make errors in both directions – this book NEVER does. The Irgun are openly and consistently described as terrorists. The PFLP are a ‘Guerrilla’ group and the Fedayeen could be classed as ‘freedom fighters’, depending on your ‘point of view’. The book does describe the violence of the Second Intifada but never uses the word terrorist to do so. Throughout the book, the word terrorist is (almost) exclusively reserved for Jewish actions.

Needing answers for a textbook such as this

To explain the massive influx of immigrants into Israel, the book describes how growing antisemitism in the Arab countries was ‘making it dangerous’ for Jews in Arab lands. The Mizrahi Jews ‘asked to leave’. The cause given was the 1948 conflict – not rising Arab nationalism. The book continually ignores all the pre-Zionist antisemitism – and any Arab motivation for violence other than opposition to Zionism – because it doesn’t fit the narrative. The destruction of Jewish civilisation in dozens of countries across the Middle East and North Africa is not mentioned.

We need to take stock of this. This type of damage is far larger than some meeting of ageing Marxists in a local scout hall – and much more insidious. How many times is this type of material entering our schools. How many children have sat through this course? In truth we need to work out how this book was ever considered acceptable. We really do need answers.

This blog is unique and I engage in deep undercover research into anti-Jewish hatred, anti-Zionism and anti-western extremism. As this particular blog on the textbook shows, we have to find this distortion everywhere that it is hiding. It is poison. Your support really does make all this possible. The work is fully independent, and I have uncovered many stories on this site that have created headline news across the globe. I was recently named as one of the J100 (‘top 100 people positively influencing Jewish life’) by The Algemeiner.  If you can, please consider making a donation towards the ongoing research.

You can make PayPal donations using the donate button above. I have also opened a Patreon page that gives the opportunity of small monthly donations.