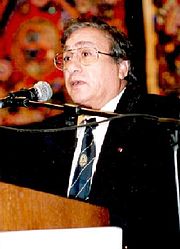 Tribute events to the late Professor Moreh (pictured) have been held in the UK and Israel.

At a meeting on 19 October attended by both Jews and non-Jews, an evening commemorating the professor was held in London. He died aged 86 on the second day of Rosh Hashana.

Aged 19, when he came to Israel from Baghdad, he was the ‘last Babylonian Jew’. Aready a published poet, he pioneered the study of Arabic language and literature at the Hebrew University – in teaching and researching this subject, Israel was at least 10 years ahead of Arab universities.

Obituary in the Times of Israel