Much has already been written about how Abu Dhabi would not permit Israeli competitors to be identified as such in the Grand Slam judo tournament:

An Israeli judoka won a gold medal on Thursday at the Abu Dhabi Grand Slam judo tournament, but had to sing his own private “Hatikvah” because the organizers refused to play the Israeli national anthem.
He also had to celebrate his victory under the International Judo Federation’s flag, because the emirate banned the display of Israeli symbols.

But what is even more outrageous is that the video feed and the website for the event, controlled by the International Judo Federation, also scrubbed the national identity of the Israeli competitors, something that goes above and beyond what the bigoted Arab nation demanded on its territory.

The website called the Israelis “IJF” in the results: 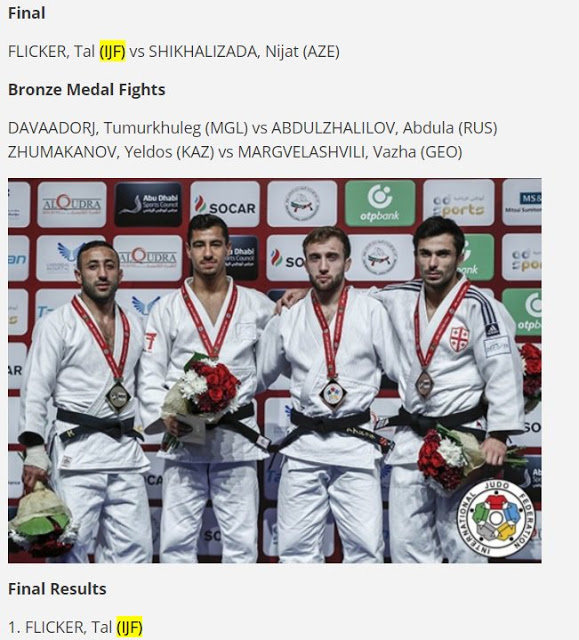 Even news articles about the tournament on the IJF site avoid mentioning Israel!

At times, the IJF does identify Israel. It has a page for the Israeli judokas and its standings shows Israel in second place as of this writing.

This is all on the IJF website and video feed today, only two days after the federation pretended to chastise the host country:for discrimination:

The International Judo Federation is demanding that the United Arab Emirates treat Israeli athletes equally after reports it is banning the Israeli flag at an upcoming contest.
A letter from the IJF to the president of the UAE Judo Federation says “all delegations, including the Israeli delegation, shall be treated absolutely equally in all aspects, without any exception.”

Now we see that this was only meant to shut up Israeli and Jewish critics, and that the IJF doesn’t even live up to the basic standards of sportsmanship.
This is beyond a disgrace. We know from the past that ethical sports federations have successfully threatened to withdraw from events held in Arab countries where blatant discrimination was enforced, and the Arabs always cave.
This is yet another example of how the Arab honor/shame mentality could have been used successfully in the fight for equal rights. Abu Shabi would be hugely embarrassed by a concrete threat by the IJF to cancel the competition rather than allow it to go on in a discriminatory way, and they would have given in. Instead, it was the IJF that bends over backwards to accommodate Arab racism while paying lip service to “absolute equality.”
(It is interesting that a UAE judoka did compete [and lose] against an Israeli, but would he have done so if Israel’s name was used?)
(h/t Gilead Ini, AviMayer)