Michael Cohen is a columnist for the Boston Globe. He is not right wing by any stretch, and I don’t agree with him saying unfounded blanket statements below like “Trump supports antisemitism.” But he wrote this in a Twitter thread that I’m converting to a post, because it is an important liberal expose of the New Republic which has gone really downhill:

There is a disquieting tendency on the left to point fingers at Jewish orgs in the face of rising of anti-Semitism. Case in point, this nasty, gross piece in The New Republic … that doesn’t even get basic facts right.

Take for example this yet another attack against the ADL, which accuses the organization of an unwillingness to confront Trump:

Among high-profile Jewish institutions there has been a tendency to condemn anti-Semitism without naming the people who have fueled its resurgence. This has been an effective fundraising strategy. The ADL, for example, received a 1,000 percent spike in online donations following Charlottesville. In a fundraising email on August 14, the ADL claimed that “at times like this, ADL mobilizes for action. We were on the ground in Charlottesville, working with officials and reporting on events.”
Its role in precluding a more forceful mobilization of the local community was not mentioned, nor that the police didn’t show up after all. The email went on to exhort the president to “fire all White House staff that do not clearly reject white nationalism.” The next day, the president himself called white supremacists in Charlottesville “very fine people.” While no one would classify that speech—or any of Trump’s actions—as “clearly rejecting” white nationalism, the ADL has not since called for the president’s resignation. The group did decide, however, to issue a call for law enforcement to infiltrate and surveil anti-fascist activists—which it later retracted.

Did they just miss this fairly direct criticism of Trump in the days after Charlottesville? 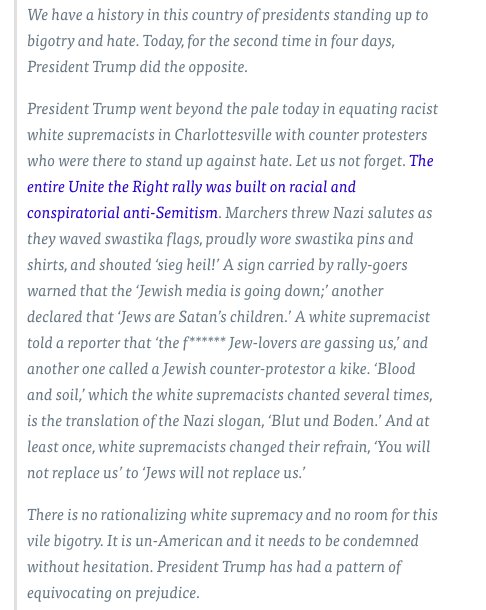 But in general, this focus at the New Republic on consistently attacking Jewish groups in the face of rising anti-Semitism needs to end. We get it: you don’t like Israel’s policies. But using rising anti-Semitism as a vehicle to attack conservative pro-Israel Jews is gross. 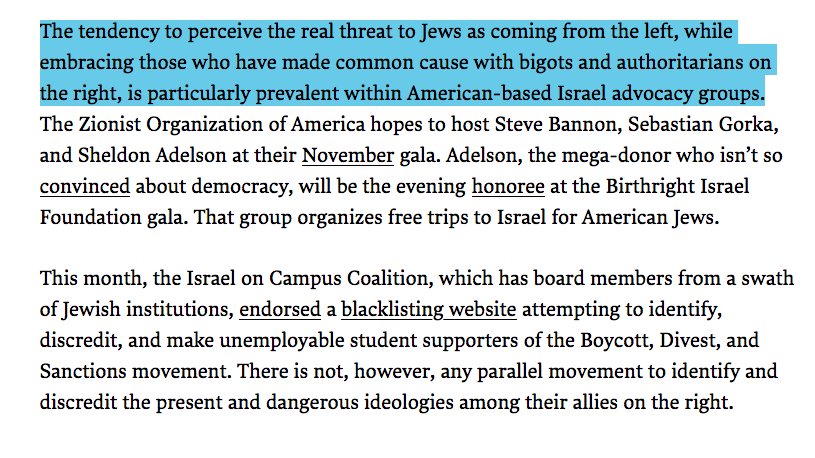 One of the groups mentioned is criticized not for association w/bigots but for organizing against BDS! Which is compelling evidence that TNR’s problem is with groups who are supportive of Israel, not complicity with anti-Semitism.

A left-wing magazine accusing groups like ADL of complicity or silence about anti-Semitism is not only untrue it’s incredibly dangerous. No observer of Jewish groups in America, like the ADL, can honestly argue they’ve stood back in the face of rising anti-Semitism.

This particular attack is intended to divide US Jews, by arguing that one side is standing up to anti-semitism and another (pro-Israel groups) aren’t.

It’s worth keeping in mind that the ADL is getting forcefully attacked from the right and groups claiming they are partisan Democrats.Why is the right doing that? Because they want to shut up the ADL and potentially put at risk its non-profit status. Why would the left join in such attacks when the ADL has been a prominent Jewish group criticizing Trump’s support for anti-Semitism?

Like I said this is not the first time TNR has gone after the ADL. It needs to stop. And I failed to mention this incredibly loaded criticism that traffics in classic anti-Semitic tropes: 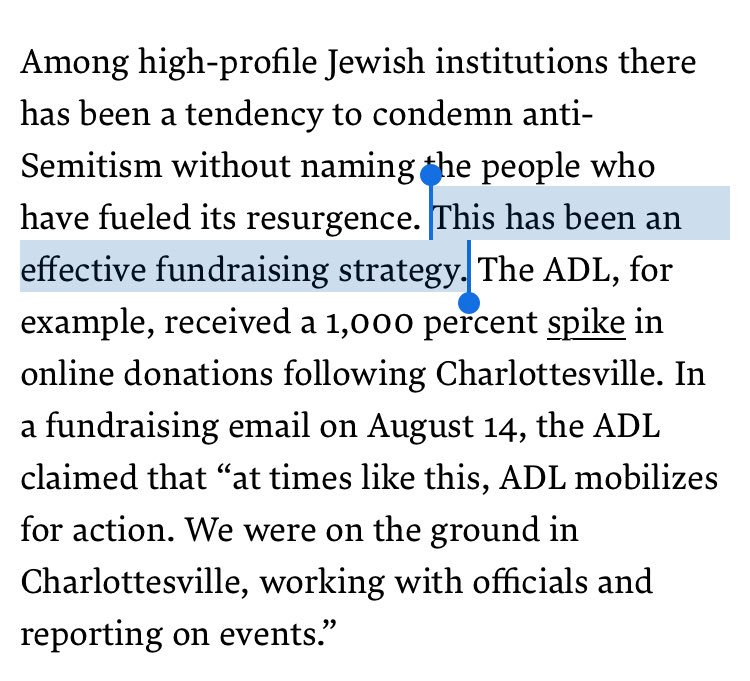 How does a suggestion that a Jewish organization is putting fundraising ahead of tougher opposition to anti-Semitism show up in a left wing magazine?

There is a blind spot on the left when it comes to anti-Semitism. Period. It’s a big problem.