On learning that 86-year-old Father Jacques Hamel had murdered in his own church in a village near Rouen by Islamist demons who stormed in during Mass and slit his throat, the president of the World Jewish Congress issued a heartfelt message of condolence:


“This morning, my thoughts and prayers are with the victims of yet another atrocious attack, and with the good people of France who sadly have become so familiar with the reality of terrorism in recent months.

Alas, there is no respite. Every day, these terrorists make it abundantly clear to the world that nothing is sacred to them, that they will not shy away from any execrable affront to the most basic values of our society.

Let’s be clear: this is not a war between religions, but between good and evil. We must stand as one in the face of this great threat. We must not be intimidated, but cherish our freedom, including the freedom to worship. We must speak out and not be silent. We must defend each other, and we must look after one another: one religious community after the other, one country after the other. This evil scourge won’t be defeated unless we are united in our resolve to defeat it.”

“Not a war between religions”.

Though perhaps not this chap Sutherland.
He’s one of the political elites  who wants Europe to be ever more f*cked culturally enriched. 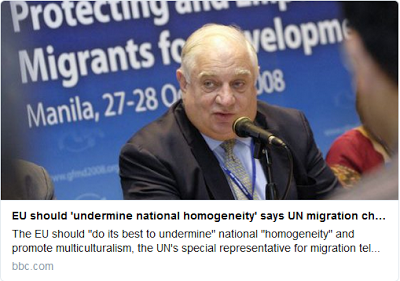 And clearly not the Pope:


‘Pope Francis has warned that a recent wave of jihadist attacks in Europe is proof that “the world is at war”.  However, he stressed he did not mean a war of religions, but rather a conflict over “interests, money, resources”.  He was speaking ahead of his visit to Poland to reporters seeking his comments on the murder of a Catholic priest by French jihadists on Tuesday….’

Or the repellent Merkel, who has dug her heels in regarding her asylum policy, despite conceding the other day what should have been obvious from the start: 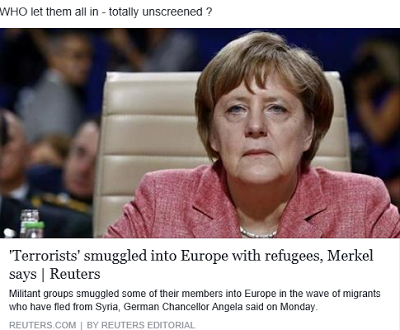 
‘Fr Jacques Hamel, murdered … by Islamists in Normandy … in his life would have seen his country transformed, from the Occupation to the Thirty Golden Years and through to this modern unhappy age. I can’t imagine that a young priest in the age of the Piuses would have expected to end his life in such a manner, near to where Joan of Arc was martyred, but then Europeans are getting used to things that a few decades ago would have been absurd.

After the war, Europeans thought they could escape history, and retire to a secular, progressive world in which historical conflicts of identity would be a thing of the past. But instead of fascism and communism, even older, more retrograde ideologies have sprung up, and history goes on.

Christianity might be dying of indifference in western Europe but elsewhere it remains a living part of history, and that story includes persecution. Being a priest or a religious remains a dangerous task – earlier this year four nuns in Yemen were murdered, while a number of priests and bishops have been killed in Syria; likewise in Iraq, where some 60 churches were bombed during the conflict, the worst incident being the 2010 Our Lady of Salvation massacre where 52 men, women and children were slaughtered by a then little known outfit called the Islamic State of Iraq. The survivors were given asylum in France, which has always been especially generous towards eastern Christians.

As well as this one (“Will Britain at last stand up for Christians?”) by Tim Montgomerie, for those who can get access to The Times:


‘Could the jihadists inspired by Islamic State stoop any lower? [The killing of Father Hamel proves] once again, that an evil is stalking the continent and it is willing to plumb any depths in its attempts to terrorise and enslave us.

Christians in other parts of the world will not have been surprised at the blood spilt in Saint-Etienne-du-Rouvray, near Rouen. Some feel that we, in the West, have turned our backs on their sufferings. “We feel forgotten and isolated,” complained Louis Sako, the Chaldean Archbishop of Baghdad: “We sometimes wonder, if they kill us all, what would be the reaction of Christians in the West? Would they do something then?”

While estimates of the global scale of religious slaughter and harassment differ wildly, there is enough evidence to suggest that religious persecution is widespread and growing. The Open Doors charity is a respected and relatively cautious chronicler of persecution and it estimates that an average of 322 Christians are killed every month as a direct consequence of their faith, while 214 churches or Christian properties are demolished, burnt down or in some way destroyed. Overall, Open Doors records, Christians are subject to 772 acts of violence — including beatings, abductions, rapes, arrests or forced marriages — each month.

We are largely familiar with the problems that Christians face in the Middle East. A century ago 14 per cent of all people in the region were Christians. Today it’s just 4 per cent…..’

They should be followed up by this one, by Lawrence A. Franklin, over at the Gatestone Institute, summarised thus:


‘Jesus warned his Apostles that men of faith would kill them, thinking they had done God a favor. Pope Francis, in the Vatican, referred to this killing as “an absurd murder.” He could not be more wrong. This was a purposeful act of war against Judeo-Christian civilization. The murder of Father Jacques has great meaning. Our would-be replacements are telling us, “it is time for you to leave the stage of history.”

This most recent murder is additional evidence that the old France is dying.’

This too, by Yves Michaud, also over at Gatestone, summarised this,


‘Europeans have delegated to the State the exclusive right to use violence against criminals. But Europeans, especially in France and Germany, are discovering that some kind of “misunderstanding” seems actually to be at work. Their State, the one that has the monopoly on violence, does not want to be at war with its Islamist citizens and residents.

Worse, the State gives off the feeling that it is afraid of its Muslim citizens. “The concept of the rule of law means that the citizen is protected from the arbitrariness of the State. … Currently, the rule of law protects the attackers above all”. — Yves Michaud, French author and philosopher.’

And this one, by Raymond Ibrahim, who warns:


‘….Mere Islam … is responsible for the ongoing terrorization of the West.

If you doubt this, simply turn to a recent study. It found that Muslims of all sects, races, and sociopolitical circumstances—not just “ISIS”—are responsible for persecuting Christians in 41 of the 50 worst nations to be Christian in: Shia Iran is the ninth worst nation, “Wahhabi” Saudi Arabia is 14th, while “moderate” countries like Malaysia and Indonesia are ranked 30 and 43 respectively.

The common denominator in all these nations is Islam—without qualifier.

…. Ugly or not, this truth, that mere Islam—not “ISIS,” “Salafism,” “Wahhabism,” or “Shiism”—promotes hate for and violence against non-Muslims will never be remedied until those in positions of leadership first acknowledge it. And, with the notable exception of Donald Trump, they are very far from doing so.’ 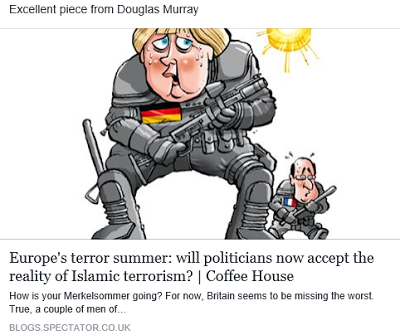 
‘We’ve already got self-censorship when it comes to reporting attacks by Muslim refugees [sic] …  in Germany and Scandinavia, and an almost comical reluctance anywhere in Europe to identify Islamist attacks as such – until IS takes credit for them, even the work of freelances. Plainly we have to guard against language that would demonise an entire community, but within that reasonable limit, we must require both politicians and public service broadcasters to talk plainly. And when Muslim extremists slit the throat of a priest in his own church, we’re looking at religiously motivated murder, entirely of a piece with the same religiously motivated murder of Christians and others being carried out in the Middle East. Shall we say so?