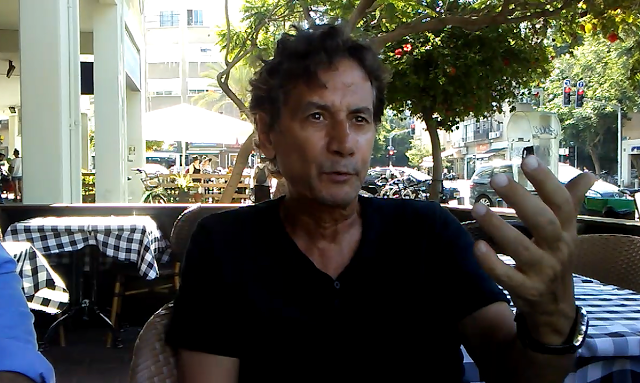 I had the opportunity to speak with acclaimed film maker Pierre Rehov in a French cafe in Tel Aviv. He is a very colorful character, and prone to lots of expletives.

Rehov described how his family was chased out of Algeria when he was a child. He knew nothing about Judaism and didn’t even understand that he was Jewish, but antisemitism was growing there. One night  a Muslim man who was a patient of Rehov’s dentist father knocked on his door. The father thought it was a dental emergency, but the man said, no, he had come to buy the apartment. He warned him that in the coming week his cousins were planning to come, rape his wife, kill his children and they will take the apartment. So it was better to sell it to the man now and flee for their lives.

Pierre described how he started getting into creating films after seeing how antisemitism in France was being increased by incidents like the Al Dura hoax.

Rehov is very angry at official French anti-Israelism. After he achieved some level of fame, Rehov says, the French government went after him. The French IRS auditors disallowed every deduction from expenses that he spent in Israel. In the end, he had to declare bankruptcy.

Rehov says that once in Gaza, around 2003, he saw people selling figurine ashtrays. The top seller was Osama bin Laden, and the second best seller was Saddam Hussein. he said that you would expect the third best seller to be Yasir Arafat, but no – it was Jacques Chirac.

At the same time, Rehov says, “When I went to visit the headquarters of Hamas in Gaza City, on the same floor – here you have a door, a small corridor, and here you have another door – the other floor was the AFP,  Agence France-Presse. In the middle, [between the two offices,] was a water cooler, and they were sharing the same water cooler. So you had the journalists of fucking AFP drinking the same water as the fucking terrorists from Hamas. And this is how information would go to France from Gaza.”

“[Using a hidden camera] I was able to record an amazing scene of Palestinian doctors, Palestinian journalists, around a woman who they claimed that she had given birth at a checkpoint because the Israelis wouldn’t let her through. The woman said, ‘No! It didn’t happen like that! The ambulance was late…’ But they told her, “No. You have to say that the tanks were pointing their cannons to you.’ The guy who was with her, the poor husband, who was also trying to play the game, says, ‘Yeah, and I helped her give birth while I was driving…’

“This guy was my fixer, He thought I was a French journalist… I was giving compliments to Talal Abu Rahma, who was the guy who filmed the story of Mohammed al-Dura. I was saying how it was so great for Palestine what he did, and also for himself, ‘Everybody’s talking about him, he’s so famous, and he got awards…’ My fixer said ‘Are you interested?’ I  said ‘What do you mean? Am I interested in what?’ He said, “The easiest thing is to kill a kid. That’s so simple. ‘ I asked ‘What do you mean?’ He said, ‘Listen. Every family has some kid that they are ready to sacrifice. Are you ready to pay $10,000?'”