For example, on January 2, Rajoub said on PA TV:

“Yesterday in Hebron, they escorted 17 Martyrs, (among them murderers of civilians –Ed.) to burial. This is of course a source of pride for all of us. I say that whoever carried out individual acts of heroism, we in the Fatah movement bless and encourage them. We consider them heroes and a crown on the head of every Palestinian. At this point, when there is weakening and frustration, there is a group of people, beginning with our brother Muhannad Halabi (who murdered 2 – Ed.) and ending with the last Martyr… There is a competition between individuals. This is one of the issues we need to address – are we for or against it? I say that we in the [Fatah] Central Committee have discussed this matter, and we are in favor.“
[Official PA TV, Jan. 2, 2016]

This is only one of many statements officially supporting and promoting terror documented by PMW.

In addition, Rajoub is also explicitly against competing against or working with Israeli sports:

The response by the IOC to these complaints shows that they have no intention to take any of this seriously.

After a thorough read of all the documents you provided, it clearly appears that the words of Mr Jibril Rajoub are not recent (2012 and 2014) and were spoken in his political capacity and not as an NOC official.

Our understanding is that the two National Olympic Committees are doing their best to improve relations between the two countries through sport. Owing to this, the competitors of the two organisations will together participate peacefully in the upcoming Olympic Games in Rio de Janeiro.

These are miserable excuses for explicit support of terror by the PA’s top Olympic official. And they directly contradict the Olympic Committee’s own Code of Ethics.

The first three paragraphs of the Code say:


1.1 Respect for the Olympic spirit, which requires mutual understanding with a spirit of friendship, solidarity and fair play;
1.2 Respect of the principle of the universality and political neutrality of the Olympic Movement;
1.3 Maintaining harmonious relations with state authorities, while respecting the principle of autonomy as set out in the Olympic Charter;

Zappelli is ignoring her own organization’s published standards to allow a terror supporter and antithesis to Olympics ideals to keep his job.

She is the only person who can refer cases to the Ethics Commission, so by her ignoring the evidence she is personally subverting the entire ethics complaint process and making it clear that the supposed Olympics dedication to ethics is a joke.

If the IOC does not suspend Jibril Rajoub based on the copious evidence of his explicit support for terror and his attempts to stop any sports cooperation with Israel, it proves that the IOC is a corrupt institution. 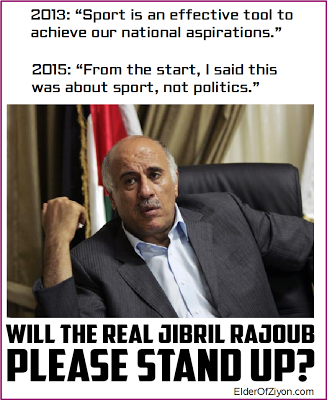 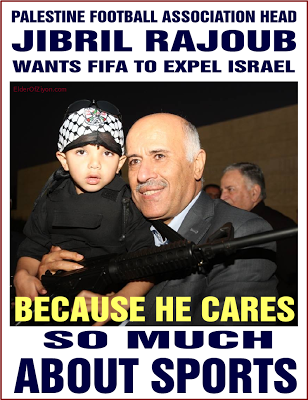