Talking about the historical ethnic cleansing of Jews from the whole of North Africa and the Middle East is an easy method of proving the antisemitism within the Palestinian cause. This example started with a simple tweet. A tweet that clearly points out that whilst Arabs make up more than 20% of Israel’s population, the rest of the Middle East and North Africa has virtually no Jews in it anywhere. Given some of these areas, like Morocco and Iraq had large Jewish populations – it becomes obvious that the Jews were ethnically cleansed from the MENA region. 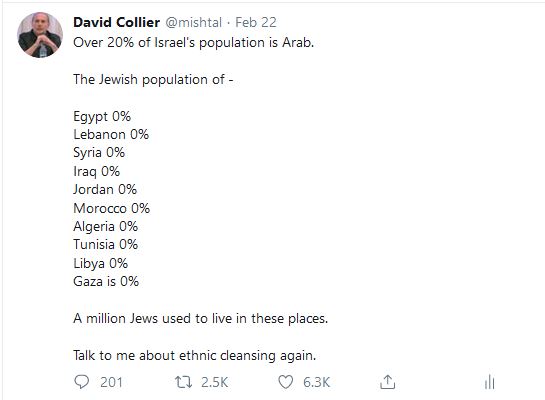 The tweet was popular, was retweeted 2500 times and received over 6300 likes. Its message is clear and easy on the eye. There were a million Jews who lived in places such as Syria, Egypt, Iraq and Tunisia. In one way or another the Arabs in the region turned on their Jews, persecuted them and in most places drove them out. An act of quintessential antisemitic persecution. So when people reference ethnic cleansing in relation to the Arab / Israeli conflict – there is ONE obvious ethnic cleansing we really have to discuss. These people were not part of a civil conflict, they considered themselves at home and identified – as Jews always do – with the host nation. There were not even violent groups amongst them. They were simply othered, persecuted and driven out from their homes – often forced to leave all their posSessions behind.

A simple equation then for the human rights activist. *If* the people who hold aloft the ‘Palestinian cause’ do it because of ‘human rights’, *then* the very least of expectations, the lowest of bars, would also have them sympathising with these Jewish victims of ethnic cleansing. If this does not occur, we have solid evidence that their support for the Palestinian cause is not driven by human rights issues at all.

There are those that resort to ‘I don’t care if you know’ antisemitism. There are accounts that publicly wear their antisemitism with pride. These people do not even try to hide it:

Response – a natural occurrence from the creation of Israel

There are those who simple write off the uprooting of 1000s of years of community life, by suggesting a million Jews – all of them – simply decided to move to Israel. The fact Jewish communities still exist in all the other nations where they have historical diaspora ties – such as the UK, US, Australia, Canada, Holland, France, Argentina and Brazil is never considered. Only throughout the Muslim world – did they disappear – and these people want you to believe -despite all the evidence to the contrary – that it was a natural occuRrence:

Then there are those who cannot be bothered to pretend to care. People who just want to talk about how evil Israel is. None of these response references the ethnic cleansing of Jews. They feel compelled to turn the conversation over to Israel. They push empty claims, twisted propaganda, antisemitic imagery and anything they need to do to deflect from the conversation taking place. Whatever is driving them, it clearly isn’t a concern for human rights. 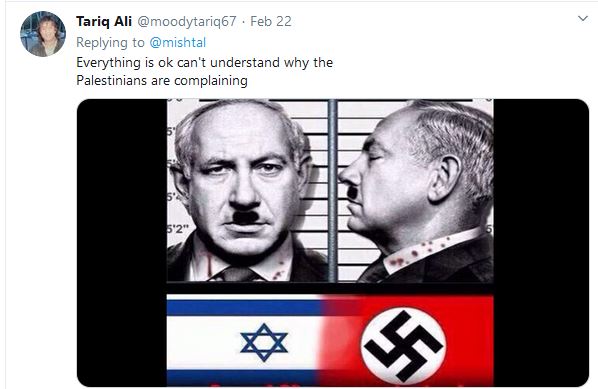 Response to ethnic cleansing – the Jews did it

The response of the more professional propagandist is to blame it on the Zionists. This is a truly vile attempt to turn everything on its head and blame the victims. The fact that in some places, Zionists were actively trying to gather support is used to suggest that every single Jewish community in the MENA region CHOSE to leave – or in some cases- were driven to fear by the Zionists themselves. When attacks took place, most notably in Egypt and Iraq – the Jews were blamed.

Historically we know there were pogroms, massacres of Jews throughout the MENA region. It is also factually correct that many nations imposed harsh restrictions on their Jews, some expelled them. None of this is historically disputed. Neither is it disputed that Jews were often forced to leave all their possessions behind. For these people the antisemitic conspiracy theories hold a stronger attraction. It doesn’t matter if Arabs were persecuting Jews, killing them or expelling them. Nor does it matter that there is ample evidence of this. All that matters is that they can blame the ethnic cleansing on the Jews themselves. 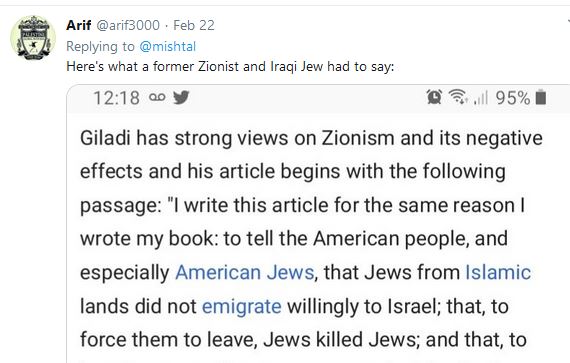 Response – but only some of them – so it wasn’t that bad – right?

It is true that in some places, such as Morocco, a tiny community remain. For some – rather than focus on the million that left – they chose to talk about the fraction that remained. Can you imagine any other ethnic cleansing producing a response of ‘well some survived’ – or ‘not all of them were expelled’. This one does:

There are those who can’t even be bothered to raise an argument:

The ‘I don’t know what I am talking about’ response

And those that do want to raise an argument and are desperate to belittle the persecution of Jews, but have no idea at all what they are talking about:

The first thing to remember is that this all came from one simple tweet. It isn’t the result of deep digging or long-term research. When you post something about the persecution of Jews – this is what you receive in response. This brutally exposes a clear and blatant truth. None of this has anything to do with international law or concern for human rights. These activists fail the most basic of tests. They simply do not care about people being persecuted. When the ethnic cleansing of Jewish people from Arab lands is placed before them – they respond with whataboutery, insults and antisemitism. If you need proof that the Palestinian cause is more about antisemitism than human rights, just look at the response to this tweet. It is *always* worth remembering this when you hear them talk about how much they care.

Please help to support this research

This research is unique – it depends on your support – and the results speak for themselves. For five years I have been creating headlines. I engage in deep research, much of it undercover, into anti-Jewish hatred, anti-Zionism and anti-western extremism. My work is fully independent, and this independence is important for the freedom to go where I need to go. The Algemeiner recently named me as one of the J100 (‘top 100 people positively influencing Jewish life’).  If you can, please consider making a donation towards the research.

You can make PayPal donations using the donate button above. I also have a Patreon page that facilitates small monthly donations.

The post The ethnic cleansing of Jews and left wing hypocrisy appeared first on The David Collier blog.