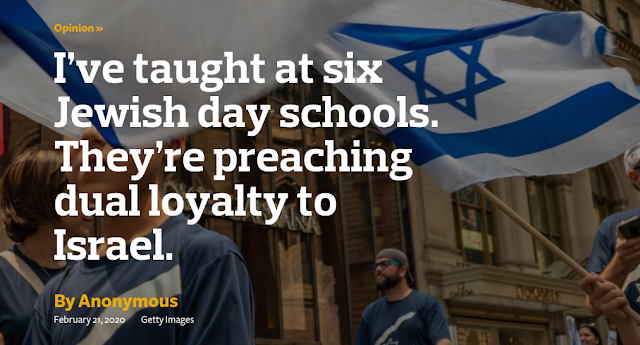 Last Friday, the Forward published what can only be considered be irresponsible piece that accuses Zionist schools of teaching students that loyalty to Israel is more important than being American.

It was written anonymously.

Imagine being a non-Jewish employee at one of these schools in New York City, maybe a security guard or a special-education teacher’s aide. You walk into the building and see Israeli flags hanging all over the place. Lessons are delivered in Hebrew — often at the obvious expense of student comprehension. Children sing HaTikvah in the morning with enforced gusto. Israeli soldiers regularly address the student body. Children wear kippot and hoodies emblazoned with the logo of the Israel Defense Forces.

Zionism is messaged in these schools as the most essential attribute of our students’ identity. It’s a huge problem.

I’ve heard teachers or administrators say at assemblies things like “you don’t belong in America,” “Israel is your country” and “the IDF are your soldiers.” When Prime Minister Benjamin Netanyahu spoke to the United States Congress in opposition to the Iran nuclear deal, against the wishes of President Obama, the high school where I was working cancelled classes to watch “our Prime Minister.” That’s a real quote.

In the six schools at which I have taught, HaTikvah was sung more often than the Pledge of Allegiance or the Star Spangled Banner. Israeli national holidays are taught with a reverence or solemnity that outstrips what is accorded to religious or American ones. Veteran’s Day was never discussed, but Yom HaZikaron, Israel’s Memorial Day, had special projects and assemblies. Many of these schools receive grants from the Avi Chai Foundation, which requires recipients to declare that they “seek to instill in our students an attachment to the State of Israel and its people.”

How irresponsible was The Forward in publishing such a piece?

It is obvious that Jew-haters will use this as evidence of the antisemitic charge of US Jews having dual loyalty (really more loyalty to Israel than to the US.)

But, the Forward editors argue, this is the real experience of an employee at these schools and their opinion shouldn’t be silenced.

They have a point. But just because something is in an op-ed doesn’t mean it shouldn’t be fact checked, and the impression that one gets from reading this is that loyalty to America is simply not taught and love of Israel is pushed at the expense of everything else.

A quick look at major modern Orthodox schools in New York shows that Ramaz hosted US veterans on Veteran’s Day.  The Heschel School has discussions with Muslim Americans on 9/11, re-creations of Ellis Island and commemorations and with African Americans on Martin Luther King day. Beit Rabban Day School has programs on the power of words  where they say “We hope they will internalize this as Jews, as Americans, and as human beings.”

Did The Forward do any fact checking? While part of the article was opinion, when making such an incendiary charge it is incumbent to get some verification from specific schools whether they refer to Netanyahu as “our prime minister.”

Beyond that, the anonymous author says that he or she worked at six schools in twelve years. That is a pretty poor record of keeping jobs as a teacher. Isn’t it likely that a person let go from so many modern Orthodox schools might have their own issues and want some sort of revenge? Shouldn’t a newspaper have higher standards in accepting an anonymously published piece than one with attribution?

This is a point that is important to me personally. As an anonymous writer myself, I strive to be as transparent as possible so anyone can fact check anything I write. If I would write about schools doing something bad, I would never generalize them and not mention their names. That is the difference between advocacy and smearing.

There is another point that cannot be understated. Love of Israel is in no way contradictory to love of America. American Jews are very appreciative to live in a country that is not only welcoming of Jews but also a staunch ally of Israel. Being able to openly march in a Yom Haatzmaut parade is something that very few diaspora Jews outside North America can even dream of. The pride of being American is part and parcel of the pride of being a Jew and a Zionist in America. Students hear the Star Spangled Banner at every sporting event, singing Hatikva in school doesn’t take away the pride of being an American.

If students at Zionist schools are being taught to disparage America then that is a story that must be exposed – by specifying the schools. If these students are being taught to love Israel, where so many of their siblings and cousins live, that is not a bad thing. By portraying love of Israel as somehow a lesson to lessen one’s loyalty to America, the Forward is not illuminating anything. It is doing nothing more than to give antisemites a very potent weapon.