This video is causing angst on Arab websites. 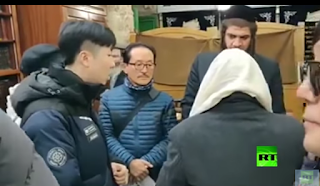 A Korean delegation to Israel who had some members infected with Corona went to the Tomb of the Patriarchs where rabbis chanted prayers for their recovery. The Koreans answered “Amen” to the prayers.

Egyptian news site Youm7 wrote, “Members of the Korean delegation performed Talmudic prayers on the campus with Jewish rabbis, and the Koreans echoed the words of the rabbi: “No to Corona … Amen.” It then juxtaposed that story with the “Al-Azhar Observatory to Combat Extremism”issuing its  annual report on the numbers of “intruders” in the Tomb of the Patriarchs,  saying 711,428 “Zionists” visited.