To judge by the coy facetiousness below, our old friend the vicar seems to be taking both seriously and not so seriously the Bishop of Guildford’s directive to him not to post anything about the Middle East on social media while he remains the incumbent of Christ Church, Virginia Water: 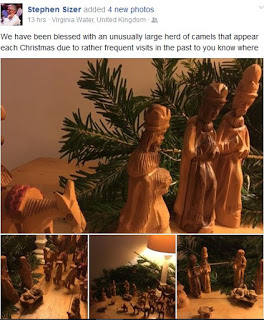 Someone asks where the camels can be purchased, and someone else replies, to which our old friend adds:

Speaking of our old friend leads to thoughts of Press TV, the Iranian government’s propaganda satellite news channel on which he has not been averse to appearing, despite the regime of the ayatollahs’ frightful record regarding human rights including those of Christians.

Happily wallowing in Israel-hatred are a bunch of European trades unionists spewing invective against the Zionist entity with no qualms about appearing on the odious Iranian regime’s propaganda channel:

And by appearing on Press TV, blissfully turning a collective blind eye to the real, ongoing and worsening human rights violations committed by Iran:

I reckon that qualifies as antisemitism, as set out in an updated chart by Edgar Davidson here