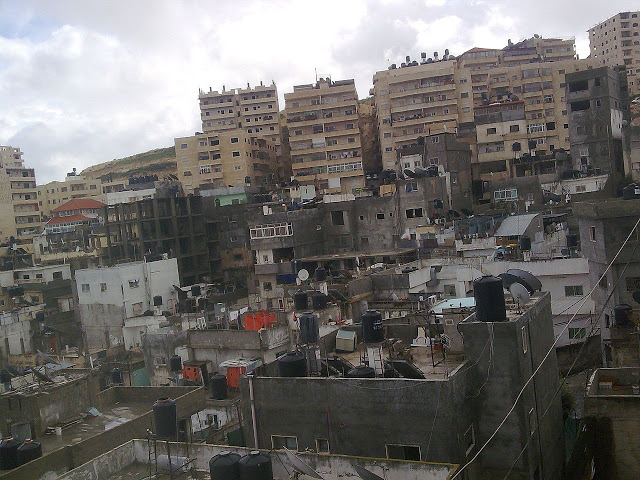 As people continue to react to the NYT magazine piece on Shuafat – written, as it turns out, by Rachel Kushner, an author  sponsored by Breaking the Silence to write anti-Israel articles for a book to come out next year for the 50th anniversary of “occupation” – there is another angle besides the one I wrote abut earlier this week about the violent beginnings of the camp.

Part of the reason that Shuafat is so crowded is because thousands of Arabs who aren’t even considered refugees by UNRWA are squatting there.

Today, approximately 12,500 Palestine refugees are registered as living in Shu’fat camp. However, UNRWA estimates that the actual number of residents in the camp is around 24,000.

Shu’fat camp was illegally annexed by Israel after the 1967 hostilities when Israel unilaterally established new municipal boundaries for Jerusalem. Camp residents still hold Jerusalem IDs and, unlike West Bank ID holders, are allowed to reside in Jerusalem. Because the Israeli Ministry of the Interior has a policy of revoking Jerusalem IDs from Palestinians who do not have their ‘centre of life’ in Jerusalem, the camp has become a popular place of residence for Palestinians (non-refugees) with Jerusalem IDs who might not otherwise afford the high living costs of Jerusalem.

As usual, UNRWA is not telling the entire story even here.

Israel has tried, for decades, to solve the problem in a way that the camp residents could continue to hold on to their Jerusalem IDs!

According to this article at the official Shuafat website, since the mid 1970s, Israeli authorities have tried to get camp residents to move to other, less crowded areas of Jerusalem, especially the Arab neighborhood of Wadi el-Joz., “but the residents of the camp have categorically refused the Israeli offer,” claiming that it would somehow impact their “right of return.”

In fact, it would mean that they would have to pay rent instead of getting free housing from UNRWA. That’s the real reason.

The same article says that more than half the residents of the camp are not “refugees.” They are squatters taking advantage of the lawlessness of the area.

UNRWA should take responsibility for expelling the residents who are not registered with them, but of course UNRWA hasn’t done that for sixty years – Arabs have been moving into UNRWA camps since the 1950s to take advantage of free services and UNRWA has never done anything about it after some half-hearted attempts in the 1950s.’

The bottom line is that Israel has tried to fix the problems of Shuafat for a long time, and UNRWA has let them fester, to follow the Palestinian master plan of keeping “refugee camps” forever as a propaganda weapon against Israel.

And Rachel Kushner and the New York Times happily follow that lead.