For those who have never heard of him, Seth Rogen is a Canadian-Jewish actor. Rogen has raised a firestorm with his controversial remarks about Israel, which he claims is ‘antiquated and ridiculous’. He was never made aware of the fact ‘other people’ lived there. He says he has been fed a huge amount of lies about Israel.

Too true, he and many ‘woke’ celebrities like him, have  swallowed a great deal of pro-Palestinian lies and propaganda.

Absent, as usual with pro-Palestinian Hollywood personalities moving in  comfortable, privileged, assimilated circles, is any awareness of the need for Israel for the vast majority of Israeli Jews – refugees or descendants of refugees.

Siamak Kordestani of JIMENA tweeted ‘and how much did you learn in your schools about the many thousands of Mizrahi Jews  ethnically cleansed  from Arab lands in the 1940s and 1950s’? 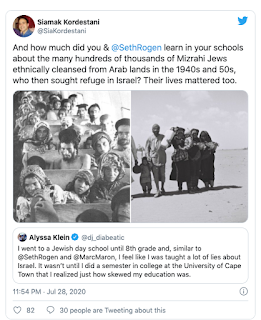 For rebuttals to Rogen, see for example here (David Suissa) in Jewish Journal  and here (Dani Ishai Behan) in Times of Israel.