The Supreme Leader of Iran tweeted his support for Black Lives Matter: 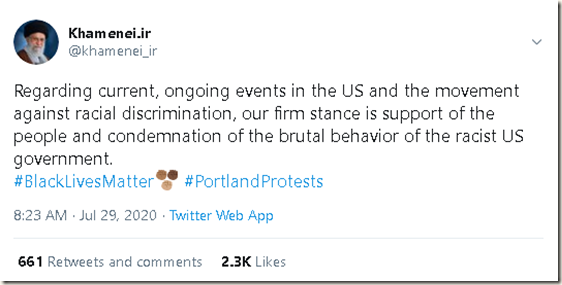 Yes, Khamanei pretends that Iran has no police brutality. Yet only last year, Iranian police killed as many as 1500 protesters. But, who’s counting?

As far as Iran’s supposed dedication to equal right goes, this week it yet again published an article in the government news site Mehr News that the Saudi royal family was Jewish, just like they did last year.

I found an English version of the bizarre conspiracy theory that says that the House of Saud was founded by a devious, murderous Jew:

In Hijra in 851, a group of people from the al-Masalih tribe, a tribe of the Anza tribe, equip a caravan to purchase cereals (wheat) and other food products from Iraq and transport them to Najd. The leader of the caravan was a man named Sahmi bin Haslul. The caravan arrived in Basra, where the caravan went to a grain merchant, a Jew named Mordahai bin Ibrahim bin Moshe. During the negotiations, the Jew asked them: “Where are you from?” They replied: “From the Anza tribe of the al-Masaleh clan.” Hearing this, the Jew began to fiercely fool each of those who came, saying that he was also from the al-Masaleh clan, but that he lived in Basra because of a quarrel between his father and some members of the Anza tribe.
After he told the story he had invented, he ordered his servants to load camel goods with food in a much larger volume; this act seemed so generous that representatives of the al-Masaleh clan were very surprised and primed for their relative, who managed to become a successful merchant in Iraq…
When the caravan was ready for departure, the Jew asked to take it with him, because he really wants to visit his homeland Nedzh. Upon hearing his request, the caravans gladly agreed to take him with them.
Thus, the Jew secretly reached Nejd. In Nejd, through his supporters, whom he passed off as his relatives, he began to diligently propagate himself. …
To achieve such ambitious plans, he began to become very close to the Bedouins and in the end he declared himself their ruler!
At the same time, the Ajaman tribe, in alliance with the Banu Khalid tribe, realizing its essence and that the insidious plan drawn up by this Jew begins to produce results, decided to destroy him. They attacked his city and captured it, but could not capture a Jew who was hiding from enemies ..
This Jewish ancestor of the Saudi dynasty, Mordahai, hid on a farm that at that time was called al-Malibed-Usaibabliz al-Arid, the current name for this area is ar-Riyad

He sought refuge from the owner of this land. The owner was a very hospitable man and allowed the Jew to stay. In less than a month, a Jew killed all the members of the farm’s owner’s family, hiding the traces of his crimes and showing as if the thieves who had entered here destroyed the family. He then announced that he had bought the land before the death of the former owner and remained living there. He renamed the area, giving it a name – ad-Diriya, as well as the area that he lost.
This Jewish ancestor (Mordakhai) of the Ibn Saud dynasty built a guest yard on the lands of his victims under the name “Madafa” and gathered around him a group of his minions, hypocritical people, who began to stubbornly say that he is a prominent Arab leader.   … He had a lot of wives who gave him a huge number of children. He gave Arabic names to all his children.

Since that time, the number of his descendants has increased, which allowed the creation of a large Saudi clan, following his path, controlling the Arab tribes and clans. They ruthlessly selected agricultural land, and physically eliminated the rebellious. They used all kinds of deceit, deceit to achieve their goals, they offered their women money to attract as many people as possible. They were especially zealous with historians and writers in order to forever obscure their Jewish origin and connect it with the original Arab tribes of Rabia, Anza and al-Masaleh.

If Iran wasn’t antisemitic, why is it obsessed with saying that the Saudis are Jews?