The Palestinian Authority’s refusal to cooperate with Israel, ostensibly because of “annexation” plans that have not happened, is only hurting Palestinians.

Which means the media is not reporting on the repercussions for fear of upsetting the narrative that Palestinian suffering comes from Israel alone.

A close reading of the UN’s OCHA-OPT reports for the last two months give a small glimpse of the issue, even though they try to downplay it as well.

Two infants died after their exit arrangements for treatment in Israel and East Jerusalem have been delayed due to the halt of coordination between the Palestinian and Israeli authorities since 21 May.

Global shortages of medical equipment and the disruption of coordination between the Palestinian Authority (PA) and Israel, in response to Israel’s plan to annex parts of the West Bank, have significantly delayed the procurement of key medical equipment. According to the MoH, up to 150,000 tests per month will be required until the end of 2020, along with at least two million gloves and up to 750,000 surgical masks every month, until the end of the year.

The United Nations Development Programme writes in an article on the OCHA website: 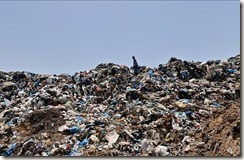 The public health hazard for both waste collectors and the people living in the vicinity of these informal sites is exacerbated due to the practice of dumping hazardous medical infectious waste, along with ordinary domestic waste…leaching from solid waste that is unsafely disposed across the oPt has also contributed to the degradation of groundwater.

After considering various alternatives, UNDP has opted for the introduction of a specialized microwave device as the main method for treating infectious waste. Following consultations with the Ministry of Health, the Environment Quality Authority and WHO, and with the financial support of the oPt Humanitarian Fund, UNDP procured such a treatment unit with a 1.5-ton capacity, to be installed at the Johr Ad Dik landfill. However, due to the halt in coordination between the PA and Israel, the processing of the required importation documents has been delayed, impeding the delivery of the device from Belgium to Israel.

Mahmoud Abbas, out of a sense of “pride,” chose to hurt his own people by stopping coordination with Israel on critical life-saving projects. He also knowingly painted himself into a corner by doing so, because even though Israel hasn’t extended sovereignty over any part of the territories, Abbas cannot change his mind without looking even weaker than he is.

The only things that can force him to act like a responsible leader would be media attention to how his policies are hurting and even killing his own people. But, as usual, international media won’t touch the story.