Intersectionality has been a big thing for years now, basing itself on the solidarity of various minorities against their oppression that crosses the lines of race, gender, ethnicity and sexual orientation.

Uniting all minorities, that is, except for Jews who refuse to renounce Israel. 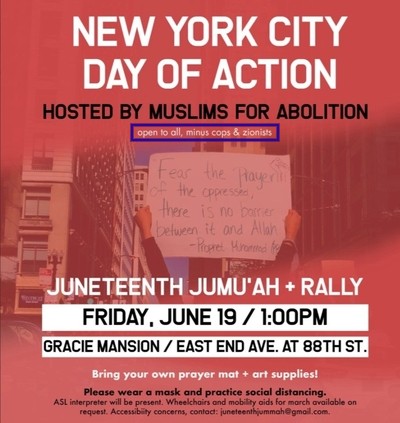 But historically, it’s not as if we needed to wait for the concept of intersectionality to come along before people would be willing able to stand up for each other. The idea of minorities standing together in defense of human rights is neither a new nor a novel idea.

For example, the history of Jews standing together with blacks is well known, and pictures of Abraham Joshua Heschel marching together with Martin Luther King in Selma are practically iconic.


demonstrated their commitment to the principle of tolerance and brotherhood not only in the form of sizable contributions, but in many other tangible ways, and often at great personal sacrifice.

These days, pro-Palestinian groups have come out in support of the human rights of blacks following the death of George Floyd at the hands of the police.

But just what have these groups done for Palestinian Arabs?

Yes, we all know that for years these self-proclaimed pro-Palestinian Arab groups have attacked, harassed and muted speakers who came on campus to speak about and for Israel.

We know who these groups speak against — but just who are they supposed to be speaking for?

They are not speaking for Israeli Arabs. A variety of different polls show that the number of Israeli Arabs who identify as “Palestinian” is down to as low as 7%. Most Israeli Arabs prefer to see themselves as Israelis (23%), Arabs (15%) or Israeli-Arab (51%). With 76% feeling a degree of Israeli identity, that shows a level of integration, contrary to the out-of-touch groups who accuse Israel of Apartheid. This is still a lot of work to do, but those groups are too busy burnishing their anti-Israel creds to offer anything constructive.

Meanwhile, Arabs in Judea/Samaria (the West Bank) and Gaza have sovereign territory under Arab rule for the first time ever in their history — under incompetent, corrupt governments with poor human rights records.

Which groups in the US are speaking out on their behalf?

At the same time, in Lebanon, Palestinian Arabs are forced to live in camps as second class citizens, suffering under Apartheid conditions where they are barred from 73 categories of jobs, suffer from 65% unemployment and 80% live in poverty.

Where are the rallies these pro-Palestinian groups have held on their behalf?

If the pro-Palestinian groups won’t raise a finger for their own people, what kind of allies are these for the Black community?

Meanwhile, in China, it is estimated that 1 million Uighur Muslims are being held in detention centers. Where is the outcry from Arabs everywhere for their fellow Arabs there?

Contrast that with the Jewish community.

Jews in the old Soviet Union were refused permission to leave while at the same time prevented from practicing their Judaism and expressing their Jewish identity. Synagogues were systematically closed down and antisemitic books were published.

But their fellow Jews around the world fought for them.

Among those who joined Jewish groups to protest was Martin Luther King, who back in 1966 addressed a national telephone hook-up of Soviet Jewry rallies:


While Jews in Russia may not be physically murdered as they were in Nazi Germany, they are facing every day a kind of spiritual and cultural genocide. Individual Jews may in the main be physically and economically secure in Russia, but the absence of opportunity to associate as Jews in the enjoyment of Jewish culture and religious experience becomes a severe limitation upon an individual.

These deprivations are a part of a person’s emotional and intellectual life. They determine whether he is fulfilled as a human being. Negroes can well understand and sympathize with this problem. When you are written out of history as a people, when you are given no choice but to accept the majority culture, you are denied an aspect of your own identity. Ultimately you suffer a corrosion of your self-understanding and your self-respect.

Among those claiming to support the Black community is American Muslims for Palestine (AMP) — which the ADL already noted in 2010 “promotes extreme anti-Israel views and has at times provided a platform for anti-Semitism” — taking up the cause of Black rights following the death of George Floyd by the police. 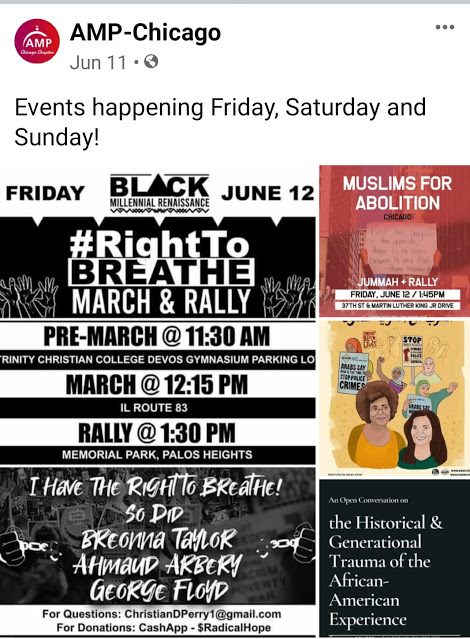 One difference from the historical Jewish support for Black rights is that among Jewish groups you don’t have leaders like the AMP’s National Development Coordinator, Mohammed Habbeh, who while president of Students for Justice in Palestine at Rutgers tweeted about Blacks being abeed, a derogatory Arabic word for “slaves,” which Canary Mission points out in their archived copies of Habehh’s tweets: 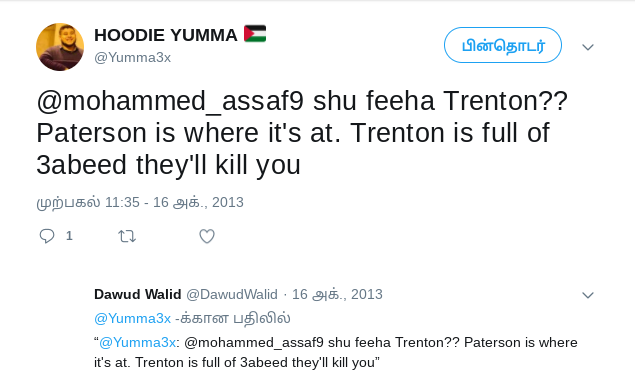 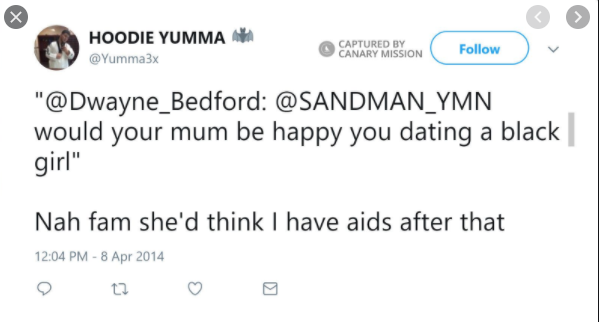 That account was closed.
In his current Twitter account, Habehh now keeps tweets private.
So much for those intersectional allies with anti-Israel, antisemitic agendas.
Come to think of it, if anything, an honest approach to intersectionality would allow for recognizing the basis for solidarity between Blacks and Jews.

In his blog on Times of Israel, Micha Danzig suggests The real ‘intersectionality’ – European and Arab oppression and persecution of Jews and Africans:

If one wants to look at credible examples of “intersecting” and “related systems of oppression, domination or discrimination” one would be hard pressed to find a better example than the millennia plus oppression and colonization by both Europeans and Arabs of Africans on the one hand and Jews on the other.

Danzig reviews the Hellenization by the Greeks, followed first by the colonization by the Romans, and then the massacre of Jews and the expulsion of millions of Jews by them — followed then by 2,000 years of oppression and massacres of Jews in Europe.

As for the Arabs, in 641CE, the Caliph Omar had both Jews and Christians removed from all but the southern and eastern fringes of Arabia. Those Jews who remained in their homeland after the Roman expulsion were treated after the invasion and conquest of Islam as second-class dhimmis, like any other non-Muslim. The yellow star the Nazis instituted for Jews to wear dates back to the Caliph Omar.

As for Black history, the Arab slave trade in Africa continues to this very day.
And one of the loudest exponents of Black pride and empowerment covers it up.
Charles Jacobs, president of the American Anti-Slavery Group, has written about how Farrakhan betrays today’s black slaves:

Cornered at a news conference on March 14, 1996, Farrakhan was asked about the slaves of Sudan. The New York Times reported that an emotional Farrakhan shot back: “If slavery exists, why don’t you go, as a member of the press?! And you look inside of the Sudan, and if you find it, then you come back and tell the American people what you found!”

The Baltimore Sun took up the challenge and dispatched reporters to Sudan where they bought the freedom of two young African slave boys from an Arab slave retriever. Their report ran as a front-page series in the Sun and was nominated for a Pulitzer Prize. Leaders of the South Sudanese peoples’ struggle for liberation then asked Farrakhan for his help. He promised he would help them but betrayed them instead.
Today, there could still be as many as 35,000 Africans in bondage to Arab masters in Sudan. Mauritanian blacks continue to serve as slaves to Arab and Berber masters in Mauritania. The black Muslim soldiers of Boko Haram in Nigeria enslave black Christians. CNN has video of Libyans holding black slave auctions, and in Algeria, Africans seeking a passageway to Europe are being caught and enslaved.
Farrakhan continues to stay quiet about black slavery in Muslim North Africa while blaming the troubles of black people worldwide on the Jews.

Two years later, the March 1998 edition of the Sudan Democratic Gazette had an article entitled Louis Farrakhan: Tormenting the Heart of Africa, on Farrakhan’s denial of Arab slavery:


Each time Farrakhan goes on his annual world tour, which always includes Khartoum [capital of Sudan], he makes it a point to slur the struggling people of South Sudan. After the 1995/96 tour, he came back and mounted a vigorous campaign to deny reports that slavery was still endemic in the Sudan. Yet, that was the time when, due to our relative military weakness, government militia were raiding villages and taking women and children to slavery as if it were 1695. Human rights advocates and institutions have vigorously investigated and proven slavery in the Sudan. There are volumes of corroborative literature on current slavery in the Sudan recorded by journalists, human rights groups, and the United Nations. Khartoum says all this is “Zionist conspiracy.” They would say that, wouldn’t they? But why Farrakhan parrots them beats me silly.

The oppression of minorities is real.
And Jews are not the only dependable allies in the fight for human rights.
But the weaponization of intersectionality is as poisonous as the long history of the exploitation of antisemitic rhetoric and hate as a tool to mobilize followers.

The exclusion of Jewish groups by those who claim to stand for the rights of all oppressed minorities is the failure of intersectionality.