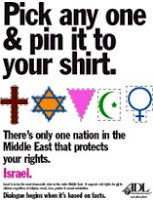 The ABC, Australia’s equivalent of the BBC, is publicly funded by the taxpayer, and in consequence is obligated, like the BBC, to be impartial and balanced on its coverage and commentary.

Like the BBC, however, it is unashamedly leftwing, and its current affairs programs, as well as its website, is the domain increasingly of activists and journalist-activists pushing their own leftist barrows, on a range of issues.  Theirs is a world in which traditional western values are derided and scorned,  a world in which the whackiest of gender bending is applauded and promoted, where racism and misogyny are fiercely condemned so long as the racism emanates from white people, and the sexism from men of “white privilege”.

Such leftist extremism, needless to say, is a domain in which the national liberation movement of the Jewish People is depicted as colonialism and lsrael routinely demonised.  And nowhere is the latter calumny on the ABC’s part better illustrated than in an excruciatingly biased piece of political propaganda on the ABC a few days ago (planted, sleight of hand, in, of all things, its Religion & Ethics page,) beginning:


‘Can there really be any doubt that the creation of the State of Israel was, at its heart, a colonialist act of dispossession, and has established an “apartheid regime” that systematically discriminates against and subjugates its own citizens? The evidence is overwhelming.’

Now 83, he is given carte blanche  by the odoous ABC to declare in the rant that


“It was a Zionist plan to convert Palestine into a land without (its) people. Hence the dispossession of Palestine carried out in 1948, in which 560 towns and villages were depopulated and largely destroyed. This major crime has continued to this day.

Racism and apartheid are intrinsic to the Zionist doctrine. Without the forcible expulsion of Palestinians, Israel could not have existed as it is today. There is not a single acre of land acquired by Israel in 1948 that was gained without recourse to military force…

Zionism was a secular, nationalistic movement; many of its key advocates were atheists. These are the people who came up with the first detailed plan to colonise Palestine by expelling the indigenous Palestinian population and by delegitimating and marginalising them in their own country. The creation of the State of Israel and the expulsion of most of the Palestinian indigenous population in 1948 — the Nakba — represented the acceleration of the “slow motion” dispossession which was a feature of this Jewish Euro-colonial history….”

I would submit that any concerned and conscientious citizen can reach this conclusion by reading about Israel’s daily violations of international law and human rights conventions in any part of Palestine under military control by Israel, and by looking at the scores of laws that specifically discriminate against Palestinians in Israel and in the Occupied Palestinian Territories.

How long must Palestinians wait for the justice and freedom which has been denied them since 1948? How long will the rest of the world tolerate the flagrant and ongoing practices of apartheid and systemic racism by the Israeli state?

In Australia, politicians frequently promote the importance of a global rules-based order in the context of criticising human rights abuses and violations of international law in various countries, but Israel has never been included in these condemnations. This omission does not serve the cause of world peace, nor the rights of the Australian citizens.”

This deliberately planted antisemitic propaganda by a national broadcaster out of control needs to be vigorously protested, and vigorously refuted.