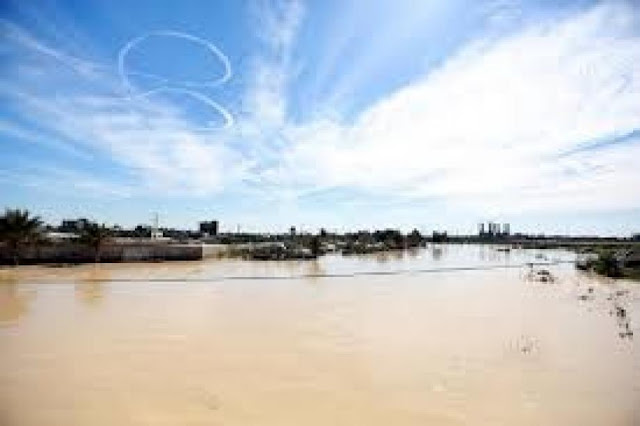 Palestinian media are reporting that for the third time this week, Israel opened up some (nonexistent) dams to flood farmland where Gaza farmers planted wheat, barley, legumes and other crops.

Quds News Network, which recently was honored by Google and the news NGOs, said:

Abdellatif Qannou’, a spokesperson for Hamas, said that the Israeli ongoing assaults on farmers and their properties are a crime and a form of the Israeli attacks on the Palestinian people.

Qannou’ added that this is an example of the Israeli barbarism, arrogance, and blatant violation of all humanitarian laws and international norms, which require an international intervention to leash the occupation and end its barbaric policy against our people.

There was severe and deadly flooding in Iran this past week as well. It took days before Iran’s president acknowledged the disaster.

I wonder if Israeli dams are powerful enough to flood Iran? Hmmm.

Meanwhile, even the UN says that Israel has nothing to do with the flooding.


Some 235,000 people residing in 39 low-lying areas lacking adequate infrastructure across the Gaza Strip are at risk of flooding during the upcoming winter season due to possible overflow of stormwater facilities and sewage pumping stations, according to estimates by the Water, Sanitation and Hygiene (WASH) Cluster for the oPt. This may expose an already vulnerable population to waterborne diseases, property losses, disruption in access to livelihoods and services, and displacement.

The immediate reasons behind this risk are gaps in maintenance and repairs of the relevant WASH facilities, compounded by the shortage of fuel to operate backup generators during long electricity outages: both factors are driven by significant funding shortages.

In 2019, less than 74 per cent of the amount needed to operate Gaza’s 484 water and sanitation facilities was funded, leaving a critical gap of $18 million.

According to the Coastal Municipalities Water Utility (CMWU), Gaza’s main provider of water and wastewater services, the running costs of Gaza’s 484 public water and sanitation facilities are US$68 million per year, including staff salaries, fuel, electricity, chemicals and spare parts. In 2019, less than 74 per cent of this amount was funded, leaving a critical gap of $18 million. According to the Palestine Water Law, the main source of funding for the operation and maintenance of these facilities is the recovery of bills from consumers. However, recovery rates in Gaza currently stand at around 20 percent, forcing CMWU to rely primarily on support from international donors, which has significantly declined in 2019.

80% of Gazans aren’t paying their utility bills that would keep them safe from disasters like this.