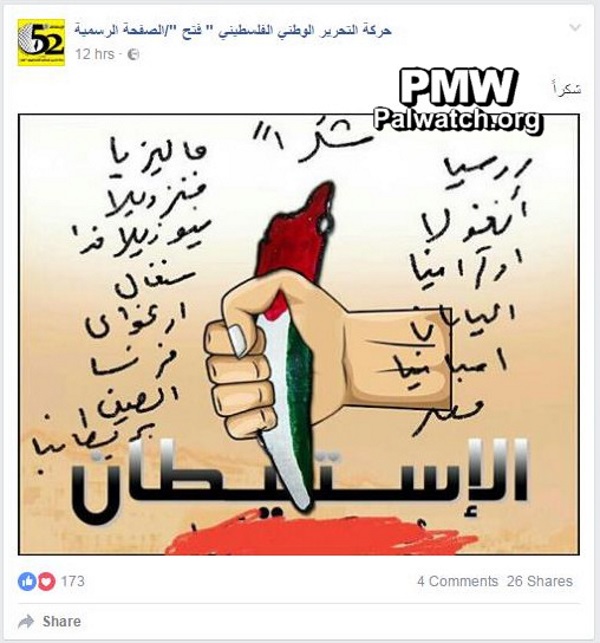 A cartoon posted by Mahmoud Abbas’ Fatah party, which bloodily thanks the 14 nations that voted for UNSC resolution 2334. Courtesy Palestinian Media Watch.

What does the resolution say? A lot of things (full text is here), but some of the important ones are

Is the resolution binding? No. It is a Chapter VI resolution, which is defined as a “recommendation.” So the UN can’t impose sanctions on Israel for violating its provisions. Only a Chapter VII resolution would be binding and would allow the imposition of economic sanctions or even the use of military force.

That makes settlements, illegal, right? No. It just asserts that they are. It refers to the 4th Geneva Convention (art. 49), but the legal argument based on this is particularly weak. A discussion of the basis for Israeli sovereignty over all the land from the Jordan to the Mediterranean is here. It’s important to understand that this resolution does not create international law, it only expresses the UN’s opinion about it.

Does this mean that Israel is “occupying Palestinian territory?” No. It means that that is what the UN wants to call it. But there is no such thing as “Palestine” for Israel to occupy, and declarations by the UN can’t make it so. Incidentally, the US never accepted this formulation before (see below).

What about the pre-1967 lines? The cease-fire agreements of 1949 that delimited them explicitly say that they are just the lines marking the locations of the armies when the shooting stopped, and they are not borders. They have no political significance. The Arabs particularly insisted on this, because they hoped to push Israel back even further. So the resolution says that the UN will not accept any changes in lines that are meaningless anyway.

Can it be construed as a call for BDS? It will doubtless be seen as a justification for the EU labeling of products from settlements. It will encourage unofficial or official boycotts of settlement products or even Israeli products, academics, artists, sports teams and more, on the basis of the claim that Israel is violating international law. There is no doubt that it will be cited as providing a “legal” basis for BDS activity, even though it has no legal significance.

Can Israelis be charged in the International Criminal Court on the basis of this resolution? Unclear. The ICC has jurisdiction over crimes committed by a national of a “state party” to the Rome Statute or in the territory of a state party. Israel (and the US and Russia!) did not accept the Rome Statute. “Palestine” while not a sovereign state, managed to get the ICC’s prosecutor to accept it as a state party anyway. The legal validity of this is questionable, but in the fantasy world of international politics, who cares?

The ICC can also take cases when directly referred by the Security Council under Chapter VII. This is not the case with this resolution.

Is the resolution balanced? Absolutely not. It affirms the Palestinians’ public position, which is that all the land beyond the Green Line belongs to them. If anything presupposes the outcome of negotiations, this is it! Israel’s stance in negotiations has been that it will cede some land to the Palestinians in return for recognition of Israel as the state of the Jewish people, demilitarization of the Palestinian state and an end to further claims (including the ‘right of return’). But if the land is recognized as belonging to the Palestinians from the start, then Israel has no right to demand anything in return.

But doesn’t it also criticize the Palestinians? They don’t see it that way. The resolution condemns “all acts of violence against civilians, including acts of terror, as well as all acts of provocation, incitement and destruction.” But the official position of the PLO and Hamas is that their “terrorism, provocation, incitement and destruction” is actually not “violence,” but legitimate resistance to occupation. Israel, in their view, is guilty of all of the above.

Does it encourage terrorism? See the cartoon tweeted by Fatah (Mahmoud Abbas’ party) at the head of this post.

What is its relationship to previous resolutions and agreements? Although it mentions UNSC resolutions 242 and 336, it contradicts them, as well as the Oslo accords, by referring to “occupied Palestinian land” (the clause about accepting changes in the lines that are negotiated by the parties is a weak attempt to sidestep this argument). There is no recognition of Palestinian ownership anywhere in international law, and in fact there are good reasons to believe that Israel holds title to it.

How does this represent a significant change in US policy? The US has always insisted that the UN is no place to decide the issues that divide Israel and the Arabs, and that all issues such as borders, settlements, Jerusalem, refugees, and others must be decided by the parties. While it has  said that “settlement activity is illegitimate” it has not previously used the expression “illegal.” And it has never taken the position that any of the territories is “occupied Palestinian land.”

In 1994, the UNSC passed a resolution condemning the mass shooting in Hevron by Baruch Goldstein. Here are some of the remarks by US Ambassador Madeline Albright in the discussion following its passage (H/T Jim Wald):

The United States supports the operative paragraphs of the resolution that the Council has just adopted. However, we sought a paragraph-by-paragraph vote on this resolution because we wanted to record our objections to language introduced there. Had this language appeared in the operative paragraphs of the resolution, let me be clear: we would have exercised our veto. In fact, we are today voting against a resolution in the Commission on the Status of Women precisely because it implies that Jerusalem is “occupied Palestinian territory”.

We simply do not support the description of the territories occupied by Israel in the 1967 war as “occupied Palestinian territory”. In the view of my Government, this language could be taken to indicate sovereignty, a matter which both Israel and the PLO have agreed must be decided in negotiations on the final status of the territories. As agreed between them, those negotiations will begin not later than two years after the implementation of the Declaration of Principles.

How much responsibility does the Obama Administration bear for this resolution? A Palestinian delegation met with administration officials earlier this month to discuss a draft of the resolution that they intended to introduce. At that time, Western diplomatic sources suggested that the administration might go along with it if some of the clauses were toned down, which was done. The resolution was introduced by Egypt in a surprise move; and after Israeli pressure and a statement by President-elect Trump influenced Egypt to delay the vote, it was re-introduced by four other non-permanent Security Council members (New Zealand, Malaysia, Senegal and Venezuela) and quickly passed.

PM Netanyahu has credibly accused the Obama Administration of “colluding” to push the resolution through, saying that it “initiated [the resolution], stood behind it, coordinated on the wording and demanded that it be passed,” although the administration denies this. Israeli sources claim that Joe Biden called the president of Ukraine and pressured him to vote for it.

It is true that the US has abstained on anti-Israel resolutions in the past, and even voted affirmatively on some. For example, the Carter Administration voted for UNSC resolution 465 in 1980, which contained some similar language to the present resolution (although President Carter claimed the vote was an unintentional “foul-up”). Most of these resolutions condemned specific actions of Israel, such as the abduction of Adolf Eichmann in 1960 or the bombing of the Iraqi nuclear reactor in 1981. But in today’s climate of vituperation, hatred and threats against Israel by so many actors in so many different venues, the support of the US for Israel at the Security Council has come to have greater significance. Obama’s action is therefore perceived as a serious withdrawal of support.

Does it matter that the US abstained rather than voting for the resolution? After the vote, Ambassador Samantha Power said (at length) that she abstained rather than voting for the resolution because of the well-known anti-Israel bias of the UN, and because “it was too narrowly focused on settlements” and didn’t give enough emphasis to Palestinian terrorism. She indicated that she would have vetoed it if it had not contained what I called the “fig leaf” provision condemning terrorism and incitement.

The fact is that the abstention and  the long, relatively friendly to Israel speech made by Ms Power will have absolutely zero effect on the consequences of this resolution. The speech will be forgotten, but the content of the resolution will not.

Practically, how bad is this for Israel? It doesn’t appear to have any immediate, direct effects. It has no significance in international law. It will not cause Israel to withdraw from the territories and it might even spur Israel to build more in the territories and Jerusalem or even extend Israeli law to parts of Judea and Samaria.

But it may be only the opening volley in a diplomatic campaign, which could play out before January 20. It sets the stage for follow-on resolutions under Chapter VII that could call for real sanctions against Israel or ICC prosecutions of its leaders, and the requirement for the Secretary General to report every three months will generate even more anti-Israel activity at the UN. It might be cited as a reason for arrest and harassment of Israelis abroad under the principle of “universal jurisdiction,” or even an ICC prosecution without a Chapter VII resolution. It will be used to justify boycotts, and even terrorism.

And – perhaps most important in the short term – at a time that worldwide hatred and threats against the Jewish people and the “Jew among nations” are greater than ever before, it will encourage Israel’s enemies, who will take it as a sign that the international community, including the US, is behind them.