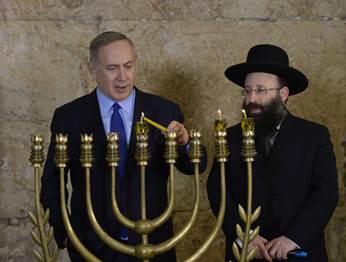 Parts of these remarks were widely reported, but it is worth reading them in full.

At the start of the weekly Cabinet meeting on Sunday morning, Netanyahu said:

“I share ministers’ feelings, anger and frustration vis-à-vis the unbalanced resolution that is very hostile to the State of Israel, and which the [UN] Security Council passed in an unworthy manner. From the information that we have, we have no doubt that the Obama administration initiated it, stood behind it, coordinated on the wording and demanded that it be passed. This is, of course, in complete contradiction of the traditional American policy that was committed to not trying to dictate terms for a permanent agreement, like any issue related to them in the Security Council, and, of course, the explicit commitment of President Obama himself, in 2011, to refrain from such steps.

We will do whatever is necessary so that Israel will not be damaged by this shameful resolution and I also tell the ministers here, we must act prudently, responsibly and calmly, in both actions and words. I ask ministers to act responsibly as per the directives that will be given today at the Security Cabinet meeting immediately following this meeting. I have also asked the Foreign Ministry to prepare an action plan regarding the UN and other international elements, which will be submitted to the Security Cabinet within one month. Until then, of course, we will consider our steps.”

“Over decades, American administrations and Israeli governments had disagreed about settlements, but we agreed that the Security Council was not the place to resolve this issue. We knew that going there would make negotiations harder and drive peace further away.

And, as I told John Kerry on Thursday, friends don’t take friends to the Security Council. I’m encouraged by the statements of our friends in the United States, Republicans and Democrats alike. They understand how reckless and destructive this UN resolution was, they understand that the Western Wall isn’t occupied territory.

I look forward to working with those friends and with the new administration when it takes office next month. And I take this opportunity to wish Israel’s Christian citizens and our Christian friends around the world a Merry Christmas and a Happy New Year.”

Netanyahu added the following remarks on the second night of Chanukah on Sunday night at the Kotel:

Of course the Palestinians arrived much later. We were in these places. We will return to these places and I ask those same countries that wish us a Happy Chanukah how they could vote for a UN resolution which says that this place, in which we are now celebrating Chanukah, is occupied territory.


We have lots of ideas, but we need more resources to be even more effective. Please donate today to help get the message out and to help defend Israel.