CAMERA has an excellent analysis of the UNSC resolution that passed last week, and it notes an episode from 1980 that was very similar.

Determines that all measures taken by Israel to change the physical character, demographic composition, institutional structure or status of the Palestinian and other Arab territories occupied since 1967, including Jerusalem, or any part thereof, have no legal validity and that Israel’s policy and practices of settling parts of its population and new immigrants in those territories constitute a flagrant violation of the Fourth Geneva Convention relative to the Protection of Civilian Persons in Time of War and also constitute a serious obstruction to achieving a comprehensive, just and lasting peace in the Middle East;
Strongly deplores the continuation and persistence of Israel in pursuing those policies and practices and calls upon the Government and people of Israel to rescind those measures, to dismantle the existing settlements and in particular to cease, on an urgent basis, the establishment, construction and planning of settlements in the Arab territories occupied since 1967, including Jerusalem;
Calls upon all States not to provide Israel with any assistance to be used specifically in connexion with settlements in the occupied territories;

In that case Jimmy Carter’s UN representative voted for the resolution – but then explained that it was a communications error, and the US meant to abstain, allowing the resolution to pass. 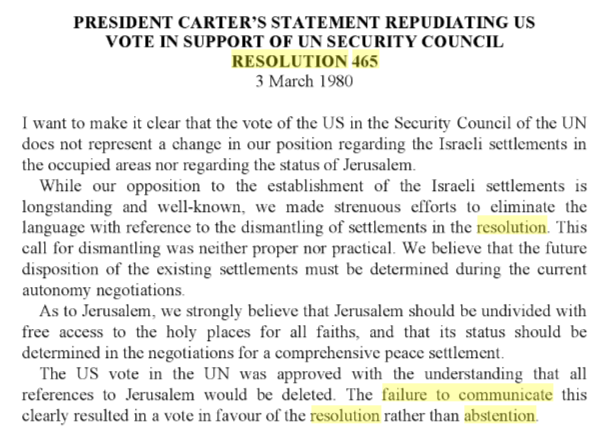 This sounds a lot like how Samantha Power justified the US abstention on the UN vote.

Carter did in fact believe that the settlements were illegal, a White House position that was changed by Ronald Reagan.

In many ways, Obama is simply copying the previous worst president of the United States.

However, there are some things that are worse with this resolution.

In 1980, there was no tacit agreement with Israel that the US would automatically veto anti-Israel resolutions relating to final status issues in exchange for Israeli concessions that led to the peace process. That has been a consistent position since Oslo (the other times that the US abstained from UNSC resolutions on Israel were about different topics, like a cease fire in Gaza that George W. Bush abstained on when he was a lame duck.)

This resolution, being post-Oslo, in many ways abrogates Oslo itself by having the UN position itself to impose a solution instead of having it come about as a result of negotiations. That’s a huge departure from US policy over the past 20 years.

So while the US allowing this resolution to pass is not exactly unprecedented, but it is a departure from US policy – certainly since Oslo in 1993 and in reality since 1981.

It should be emphasized that the UN resolution was passed under Chapter 6 of the UN Charter, not Chapter 7, and therefore does not become international law.

Obama was always Carter-like. And just like Carter was succeeded by a president who radically changed US policy towards Israel, so is Obama.

You can also be certain that Obama will show his true anti-Israel venom even more after he is out of office,  and he will use his prestige as a Nobel Prize winning former president to attack Israel for the rest of his life.