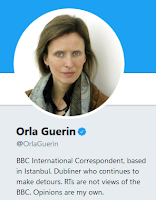 The execrable Orla Guerin, the BBC’s Istanbul-based correspondent, who in her own words “continues to make detours”, certainly proved her anti-Israel credentials yet again with her vile gratuitous comment (directly below, in bold font) during the BBC’s News at Ten coverage of the 75th anniversary of the liberation of Auschwitz-Birkenau:

“In Yad Vashem’s Hall of Names, images of the dead. Young soldiers troop in to share the binding tragedy of the Jewish people. The State of Israel is now a regional power. For decades it has occupied Palestinian territories. But some here will always see their nation through the prism of persecution and survival.”


“It is difficult – no, it is impossible – to see this as anything other than Ms Guerin’s hatred of Israel spilling over into a desecration of the Holocaust. On this most solemn of occasions, linking the murder of six million Jews with Israeli occupation of the West Bank is simply obscene.

Note that ‘but’ in her final sentence. You Israelis, she is saying, are the bullies now, with your military and your occupation. ‘But’ you have the gall still to think of yourselves as being the persecuted.

Forget the historical illiteracy. Forget the self-righteous sneering. Forget everything about this despicable report except this: Ms Guerin represents the perfect distillation of the phenomenon which obsesses over Israel, the only sanctuary in the world for Jews, and does not merely decry the Jews having the right to such sanctuary – and thus, in the context of the Holocaust, the right to exist – but which turns the murder of six million Jews into an act of which it is the Jews who should somehow feel ashamed. It is the Jews, in other words, who do not live up to the memory of the Holocaust.

This attitude – never explicit, of course – is all around us. It provides the context for Labour antisemitism, for the bias of newspapers like the Guardian, and for rising antisemitism generally.

It is to the BBC’s eternal shame that it allows such a piece to be broadcast.” [Emphasis added here and below]


“The BBC is supposed to inform the British public, not feed them propaganda. Few could imagine perverting what is supposed to be an educational piece about the Holocaust to instead fuel the very antisemitism that such education is supposed to prevent, but that is what the BBC has done. It was utterly appalling to watch Orla Guerin hijack a segment dedicated to remembering six million murdered Jews, and instead use it as a vehicle to desecrate the memory of the Holocaust with her hatred of the Jewish state. Ms Guerin and the BBC editors who allowed this to be aired must be made to face the consequences of this sick act, which is why we are now making an official complaint and will take the matter to Ofcom if necessary.”

All who are disgusted by Orla Guerin’s  remarks are encouraged to complain to the BBC: see here for details.

Needless to say, there is much condemnation of Guerin from outraged Jews and non-Jews on social media.

These tweets typify the thrust: 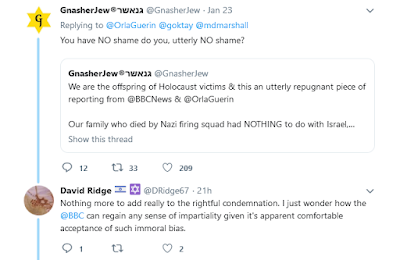 But this one can’t be beaten for cut and thrust!