Prince Charles’ speech at the Holocaust Forum was quite good. Unlike most of the speakers who tried to insert their own political themes into their speeches, Charles spoke about individual victims and the importance of remembering and drawing lessons from the unthinkable.

The lessons of the Holocaust are searingly relevant to this day. Seventy-five years after the Liberation of Auschwitz-Birkenau, hatred and intolerance still lurk in the human heart, still tell new lies, adopt new disguises, and still seek new victims.

All too often, language is used which turns disagreement into dehumanisation. Words are used as badges of shame to mark others as enemies, to brand those who are different as somehow deviant. All too often, virtue seems to be sought through verbal violence. All too often, real violence ensues, and acts of unspeakable cruelty are still perpetrated around the world against people for reasons of their religion, their race or their beliefs.

Knowing, as we do, the darkness to which such behaviour leads, we must be vigilant in discerning these ever-changing threats; we must be fearless in confronting falsehoods and resolute in resisting words and acts of violence.

So it is especially jarring that Charles followed up his visit to the hallowed ground of Yad Vashem to honor Mahmoud Abbas, a Holocaust denier who has engaged in explicit antisemitism, who honors terrorism and literally pays terrorists every day. 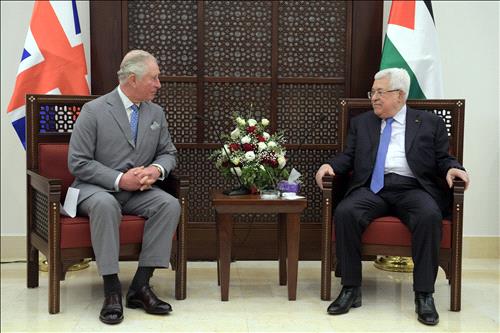 Abbas met with Charles in Bethlehem, a city where Christians have been fleeing Muslim persecution, and claimed that Christians and Muslims under his rule live in peace and harmony.Charles, of course, didn’t say anything, because he is not “fearless in confronting falsehoods.”

It isn’t only Charles, of course. Vladimir Putin and Emannuel Macron both met with Abbas as well during their visits.

I am not saying that it is always inappropriate to pay a state visit to the dictator of the Palestinian Authority. But to do so within a day of a visit to Yad Vashem where impassioned speeches are made about learning the lessons of the Holocaust, and immediately paying honor to a modern day Nazi who teaches his people that they must destroy the Jewish state via terror and “return,” is the height of hypocrisy.