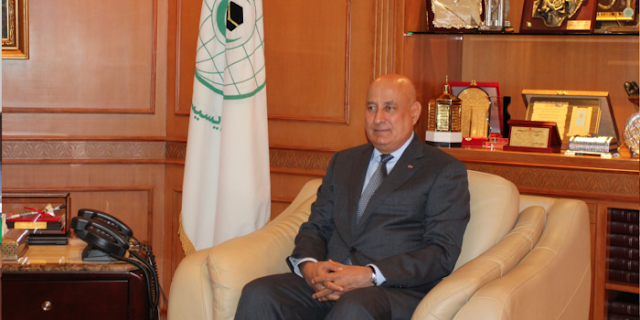 
Dr Abdulaziz Othman Altwaijri was the Director General of the Islamic Educational, Scientific and Cultural Organization (ISESCO) from 1991 to 2019, and ex-officio Secretary General of the Federation of the Universities of the Islamic World (FUIW). Dr Altwaijri is an accomplished academic, a senior lecturer, and an eminent writer and poet. Armed with a keenly holistic vision for human civilizational development, Dr Altwaijri played a vital role in the development, supervision, and launch of 16 strategies approved by the Islamic Summit Conference. He also established the Supreme Council of Education, Science and Culture, an alliance designated for work outside of the Islamic world. Dr Altwaijri is also a staunch advocate of cultural dialogue and the alliance of civilizations. 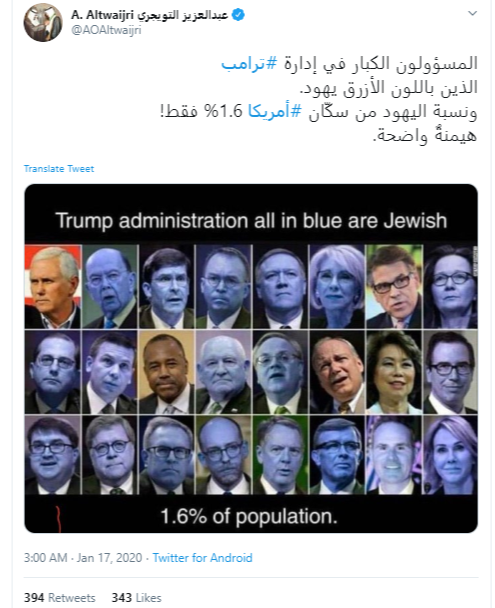 Senior #Trump administration officials in blue are Jews. And the percentage of Jews from the population of #America  is only 1.6%! Clear dominance.

The head of the major Islamic cultural organization for some 29 years pushes anti-Jewish conspiracy theories.

Incidentally, the chart is a complete lie.  A little research shows that only one person in the entire cabinet is Jewish, Secretary of the Treasury Steven Mnuchin. (The original color photo is from CNN and lists everyone there.) Wikipedia does not mention that any other person is Jewish although Attorney General William Barr’s father was born Jewish and converted to Catholicism.

So instead of the cabinet being 75% Jewish, it is about 4% Jewish.

The longstanding head of ISESCO is an antisemite and a liar.

Altwaijri is not stupid or uneducated. He has an MA and PhD from the University of Oregon. He’s certainly familiar with Jews from his university days.

And none of that helps. He’s an antisemitic conspiracy theorist who retweets antisemitic lies.

The real scandal is that this is not a scandal, and it will never be a scandal. Because the enlightened liberal West expects Muslims to be antisemites and liars, and holds them to no standards whatsoever. Any prominent Israeli who tweeted something remotely as offensive would be on the front page and forced out of whatever job he or she had.

Holding Muslims to standards you would never tolerate from non-Muslims is bigotry, plain and simple.

But, strangely,  the Left considers anyone who points out Islamic bigotry to be an “Islamophobe,” not the people who assume Muslims are bigoted by staying silent.