TOP NEWS
http://jewishrefugees.blogspot.com/2020/09/now-is-time-to-tell-arab-world-about.html
The signing of a peace accord between Israel and the Gulf states and Bahrain should be the cue for educating the Arab world about  the 850,000 Jewish refugees  forced to leave or expelled from Islamic lands, argues Karmel Melamed in JNS News. 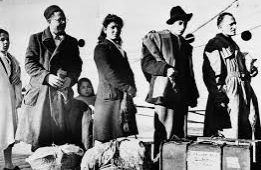 Following the signing of the peace deals between Israel, Bahrain and the United Arab Emirates, American Jewish leaders from prominent organizations such as the Conference of Presidents of Major Jewish Organizations, the American Jewish Committee and the World Jewish Congress have come forward to discuss how they have played a quiet, behind-the-scenes role over the past 25 years to encourage the Gulf nations to seek peaceful relations with Israel.

Now that Israel has established a “warm peace” with Bahrain and the UAE, perhaps it is the best time for these same American Jewish organizations and their leaders to begin an educational campaign in the Arab language media about the 850,000 Jewish refugees who were forced to flee or were expelled from Islamic lands during the 20th century. Sharing the stories of the Mizrahi Jewish refugees with the Arab media and the Arab world may not only strengthen the peace Israel has established with these two Arab nations by showing Israel’s Middle Eastern roots, but also educate and enlighten the Arab masses about the Jewish refugees from the Middle East after 1948.
As a Mizrahi journalist, I believe that sharing the Mizrahi refugees’ story with the Arab and Islamic world today, when the tides of peace are upon us, is one of the most important things we can do to as Jews living in diaspora to ensure this new peace is solidified and maintained for years to come.
For more than 70 years the American Ashkenazi community’s leadership has horribly failed to educate Jews in America about the plight of 850,000 Jewish refugees who fled or were forced out of the Arab countries and Iran during the last century. American Ashkenazi leaders have ignored the painful stories of Mizrahi Jews facing imprisonment, torture, executions, pogroms, forced exile and asset confiscations in the various Islamic countries they lived in after 1948.
Likewise, the American Ashkenazi leaders have also failed to raise the issue of these Mizrahi refugees within the larger American and international dialogue when it has come to discussing the issues of the Middle East conflict. Moreover, Israel for decades had itself failed to share the narrative of the Mizrahi refugees from the Islamic countries even though more than 50 percent of the Israeli population is of Mizrahi background today. For decades, these failures in discussing the Mizrahi refugees’ painful experiences have allowed the Palestinians and many Arab leaders to spew their false narrative that the Jews of Israel are “foreign colonialists from Europe” who have no true roots in the Middle East roots.
Read article in full