With thanks: Michelle and Kheder

For the first time, an Iraqi newspaper has paid tribute to  Jewish philanthropist Steve Maman. 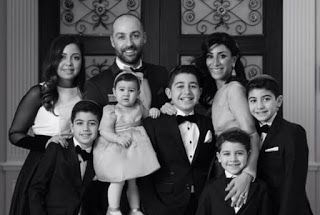 Steve Maman and his family

Journalist Imran Hussein profiles Maman and his work to rescue Yazidis and Christians from Islamic State in Iraq.

However, Hussein describes Maman simply as a Montreal businessman with a wife and six chldren, making no reference to the fact that he is an observant Jew from Morocco. The mere mention of Maman is nevertheless a breakthrough, indicating that the Iraqi press is freeer than it has ever been in the past.

In another example of Iraqis reaching out to Jews, the committee for the defence of religious and ethnic groups in Iraq  has extended its greetings to Iraqi Jews on the occasion of Hanucah.

The logo of the Committee for the defence of religious and ethnic groups in Iraq.

Ala Mahdi sends congratulations and blessings. “Our brothers in humanity the Jews in particular loved us Iraqis wherever they were in the world. Merry Christmas free of all manifestations of mourning and sadness.”