‘It is untrue that the world is siding with the Jews’: meet BDS fan Haj Amin al-Husseini – the ‘Hitler of the Holy Land’

By Petra Marquardt-Bigman
In early December, the Committee for Accuracy in Middle East Reporting in America (CAMERA) and the Harvard Law School Alliance for Israel held a conference entitled “War By Other Means – BDS, Israel and the Campus.” One of the speakers was Cornell Professor William Jacobson, whose presentation was on the history of the Boycott, Divestment and Sanctions (BDS) movement. The presentationis now available at Legal Insurrection, and it is a must-read (or must-watch) because Jacobson shows that “BDS is a direct and provable continuation of the Arab anti-Jewish boycotts in the 1920s and 1930s and [the] subsequent Arab League Boycott, restructured through non-governmental entities to evade U.S. anti-boycott legislation and repackaged in the language of ‘social justice’ to appeal to Western liberals.”
When I read through Professor Jacobson’s presentation, I remembered that some time ago, I had come across an archived JTA article from September 24, 1929 that provides a perfect illustration of the conference theme that boycott campaigns should be understood as “war by other means.”
Published a month after the notorious Hebron massacre and the subsequent Arab violence, which left 133 Jews dead,  the articleis entitled “‘My Hands Are Clean,’ Grand Mufti Asserts in Interview;” and as the title suggests, it describes an interview with Haj Amin al-Husseini, who had incitedthe violence with the pernicious (and still popular) libel that “the Zionists” were plotting to damage or destroy the Al-Aqsa mosque in order to rebuild the Jewish Temple.
Shortly after the bloodbath he had incited, the man who would eventually become known as “Hitler’s Mufti” felt rather confident that the Jews would soon be forced to leave British Mandate Palestine. He asserted (rightly) that “it is untrue that the world is siding with the Jews” and then proceeded to explain:
“We are … assured of the solidarity of the entire Moslem world and have actually offers of armies to help us if necessary. Help is unnecessary. We will win through an economic boycott. The boycott in Moslem countries against Jewish industries is tight and daily growing tighter, until the industries will be broken and English friends, moved by pity, will remove the last remaining Jews [from British Mandate Palestine] on their battleships. Today there’s not a Jewish factory working in Palestine … (which happened to be entirely untrue) [and] as Jewish industry depends on the good will of the surrounding Moslem countries, the factories may as well remain closed. The Moslems will not buy.”
While the mufti’s hopes of driving out the Jews with a successful economic boycott didn’t work out in his lifetime, he would surely be pleased to know that there are still people who haven’t given up on his lofty goal; and he would surely be no less pleased to see that it remains indeed “untrue that the world is siding with the Jews.” (Congratulations to the UN Security Council for proving the mufti right once again!)
The mufti also said some other things that you can read any day at Ali Abunimah’s Electronic Intifada and similar sites: he complained about “the aid of rich American Jews for the Palestine upbuilding” and claimed that this aid “made the Palestine Jews so arrogant, they thought they could start expelling is [us].” And just like Palestinian leaders nowadays, al-Husseini denied having incited the murderous violence.
Another remarkable parallel to today’s news is that al-Husseini was rumored to have become quite rich by misappropriating funds he had collected for repairs of the Dome of the Rock. The article’s description of him is intriguing:
“The Mufti spoke in French and granted the interview in the presence of Jamal Effendi Husseini in the palatial office buildings located in the galleries of the Mosque of Omar. The 31 year old Amin El Husseini, with blond beard, sparkling blue eyes, ingratiating smile and pleasant mundane manners, sat in silken robes on a luxurious divan and smoked cigarettes taken from a gold beaten box, holding a morning levee like a mediaeval Turkish Pasha. The hall and corridors were filled with servants, ushers and courtiers. When politely told that world opinion is holding him personally responsible and partially guilty for the savagery and unspeakable assaults, the Mufti smiled and with a sweeping gesture, showing delicate manicured hands, he declared: ‘My hands are clean, I declare before God.’”
As it happens, when I researched this post, I came across another fascinating article about al-Husseini from June 1948. At first, I was not sure if the site that featured it, i.e. Old Magazine Articles, could be trusted. The article is entitled “Hitler of the Holy Land” and the sub header describes the mufti as “a master of terrorism.” But I found out that a ’48 Magazine indeed existed – in fact, it was apparently a relatively expensive highbrow magazine – and the author of the article, David W.Nussbaum, wrote at least two (but likely four) other articles on the mufti elsewhere in the immediate postwar years. According to the information given about Nussbaum, he was a “former Washington correspondent of Life, magazine writer and Navy air veteran” who in early 1948 had “just returned from an extended survey of conditions in the Middle East.” His article on the “Hitler of the Holy Land” is absolutely fascinating (it can also be downloaded as a pdf if you click the blue button “Read article for free” just above the space for comments). 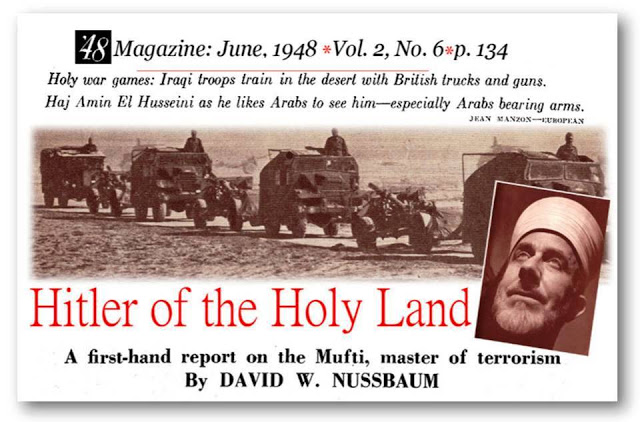 In the almost two decades that had passed since the 1929 interview, the mufti had apparently lost his “pleasant mundane manners;” Nussbaum described him as “a man who has spent a lifetime fleeing justice” and who, “in his struggle for power, counts no man as a friend.” In Nussbaum’s view, the mufti was a crucial and cunning leader who ensured that the Arab conflict with the Jews would not be settled peaceably. Reportedly, al-Husseini told him: “What you see unsheathed in Palestine is the sword of Islam. Whenever they are beset, the Arabs will inevitably unsheathe it.” Asked if the Arabs had enough arms and men to win a war, the mufti responded: “Consequences do not disturb the Arab as they do the Westerner. The Jews do not reckon with this factor. If he is attacked, the Arab fights back regardless of the consequences. The fighting in Palestine has been inevitable since the first Jew set foot there.”
But Nussbaum believed that it was the mufti who worked hard to make war “inevitable”:
“War in Palestine is the goal that the Mufti set himself in the summer of 1946 [when he fled France], and it is the goal that is now being achieved. […] While he tightened his grip on Palestine, the Mufti waged a shrewd campaign within the Arab states. In Egypt, he made effective use of the extremist right-wing Moslem Brotherhood, which, supported by students, staged well-timed demonstrations in Cairo, shouting for revenge against the Jews. Fire-breathing statements began filling the Lebanon papers. In the lobbies of the Arab League conferences, the Mufti hammered away at the idea of jihad – the holy war.”
So it seems Palestinian President Mahmoud Abbas knew what he was doing when he repeatedly paid homage to al-Husseini, praising him for having “sponsored the struggle from the beginning.”
But importantly, the “struggle” al-Husseini “sponsored … from the beginning” was not really about Palestine, but rather about Arab-Muslim rule. When Nussbaum asked him if he was looking forward to “an early return to his homeland,” al-Husseini “ruminated for a few moments and then said, ‘Palestine is not my home; it is only one of them. Cairo is home and so is Syria. Whenever I am among my own people, I am home.’”