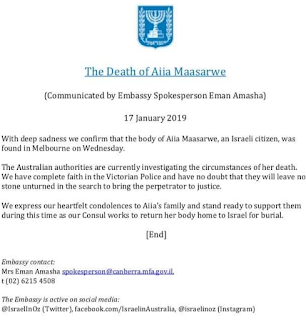 The rape and murder not far from her campus in the Melbourne suburb of Bundoora last week of Israeli Arab exchange student Aiia Maasarwe (a gifted 21-year-old from a Muslim family in Baqa al-Gharbiyye, from which city, incidentally, comes the first Muslim woman to serve in the Israeli diplomatic service) has, understandably, caused widespread anger and anguish here in Australia.

The press are reporting this weekend that Ms Maasarwe had been bludgeoned to death about the head following a sexual assault so savage that police have applied for a formal reporting embargo regarding the harrowing details.  (One federal senator, who dubs himself “the human headline”, had already, to wide condemnation from people concerned for the feelings of the victim’s family, had  tweeted a harrowing detail that he alleges he learned from a police source.) Whether the full story will emerge during the trial of the man accused of Ms Maasarwe’s murder remains to be seen.

On Friday evening a silent vigil was held on the steps of Victoria’s State Parliament in Melbourne, looking down towards tram stop at the intersection with Bourke Street where Ms Maasarwe boarded the tram the night she died, after socialising with friends.  Her father, Mr Saaed Maasarwe, addressed the large crowd to thank them for their support and to pay tribute to his daughter, and afterwards members of the public carrying bunches of blooms (including red roses, her favourite flower)  boarded the number 86 tram to Bundoora as she had done a couple of evenings earlier.  Further rallies, not only in Melbournr but in Sydney and Canberra, have been held today.

There can be few people, of all creeds and none, and irrespective of political belief, who are not deeply upset by the terrible fate of Ms Maasarwe, or unmoved by the sorrow expressed by her tearful yet supremely dignified father on behalf of his daughter, himself, and his family..

So it is disappointing to find sections of the anti-Israel movement in Australia trying to twist this tragedy for their own ends, as we glimpse, for instance, here: 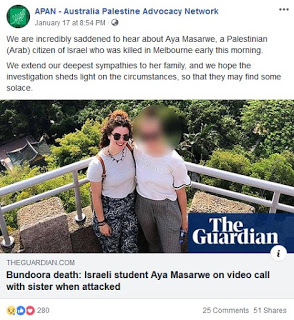 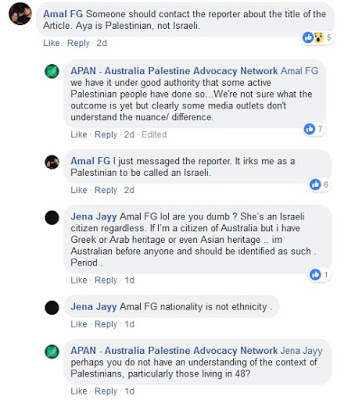 Meanwhile a number of Israelis and Australian Jews are hoping that Mr Netanyahu will meet Ms Maasarwe’s grieving family sooner rather than later to show his support, just as the Australian prime minister, Scott Morrison, met Mr Maasarwe to express his condolences.

I  expect that, like me, many Australians who, directly following Channel Nine’s news of the shocking murder of Aiia Maasarwe, tuned into Channel Nine’s coverage of the Australian Open tennis tournament to try to focus on something less heart-rending, were absolutely astounded to see the  misogynistic advertisements starring Charlie Sheen that have been featuring prominently during the tennis.  Menories of the equally misogynistic ads starring Mike Tyson that marred coverage of the Open when I last watched it (it was then on Channel Seven) came flooding back.

For the car servicing company Ultra Tune, these misogynistic ads, proudly and defiantly defended by the company’s executive chairman Sean Buckley, were ably slated in the Melbourne Herald Sun of 14 November 2018 by journalist Michelle Andrews, who wrote inter alia:


‘Being a washed up celebrity of the 80s and 90s is also a crucial element in being cast in one of the auto repair company’s videos, but increasingly, there’s another line you should aim to have on your resume that’ll give you a cut above the rest.

And that is convicted rapist or convicted domestic violence offender.

In January of this year, the car servicing company’s Executive Chairman Sean Buckley chose retired boxer Mike Tyson as the face of the sixth instalment of the “Unexpected Situations” advertising campaign, which follows the storyline of a group of women that, aesthetically speaking, could best be described as playing the part of clueless bimbos, being rescued from a roadside situation by the help of a man….

In 1992, a jury found Tyson guilty of raping an then 18-year-old woman. Years earlier, his first wife, Robin Givens accused Tyson of domestic violence and was successful in obtaining a temporary restraining order against him during their divorce….

[T]he ad received an unprecedented amount of complaints, to which Buckley replied, “I think I know what I’m doing. The ads work brilliantly.”

Now … they’ve passed the baton on to Charlie Sheen.

[T]his is the same Charlie Sheen who in 1997 pleaded no contest to slamming his former partner Brittany Ashland’s head into a marble floor; pleaded guilty to third-degree assault after pressing a knife to his third wife Brooke Mueller’s throat and was forced into a rehabilitation program a decade later; was accused of watching pornography involving boys who looked underage by his ex-wife Denise Richards during their 2006 divorce proceedings. And according to Hollywood madam Michelle Braun, who alleges to have supplied Sheen with sex workers for a number of years, Sheen’s requested “type” of woman was someone who possessed “two tits, a hole, and a heartbeat.”

But according to Buckley, who made a recent Facebook post about his choice of Sheen, we’ve got it all wrong. He’s really just a “lovely down to earth guy”.

… So surely we can all agree that it’s a little hard to change attitudes about violence against women when one of our biggest auto company’s uses our TV networks to push the glamorisation of an abuser to the masses. ‘

The latest ad is drawing well-deserved flak from Twitter users.  And no wonder. In Australia, with its disturbingly high rates of domestic violence,  no less than 69 women were killed by abusive male partners in the past year alone.   Yet derogatory, demeaning ads of this nature (mockery of and hate speech against women, and as such on a par with racism) are tolerated even while politicians pay lip service to women’s rights.

The terrible murder of Aiia Maasarwe invites comparison with four other notorious killings of young women that have taken place in Melbourne since 2012.  To quote journalist Karen Sweeney on Twitter:

‘Aiia Maasarwe took public transport, talked on her phone, knew the area and was close to home, she was between a 24-hour service station, a shopping centre, a row of townhouses, a major road and intersection and she was still murdered. How far do we have to go to stay safe?

Jill Meagher had talked on the phone with her brother, was walking along busy Sydney Road in Brunswick and her husband was waiting, expecting her home just minutes after she was dragged off the street, raped and murdered on September 22, 2012.

Renea Lau was on her way to work when she was chased down, beaten and raped beside the Victoria Police Memorial at 5:30am on June 28, 2014. The attack lasted 80 minutes and she lived, with horrific injuries, for at least 35 of those minutes.

Masa Vukotic was murdered in a frenzied attack in broad daylight while walking on a track near her home after school on March 16, 2015. Her killer spent 11 hours searching for a victim before deciding she would die because he didn’t like the way she was talking to the birds.

Eurydice Dixon was stalked for five kilometres over an hour before being raped and murdered 900m from her home on June 13, 2018 after a night with friends. She’d just messaged her boyfriend to say she was nearly home safe.

They were women walking alone. We all do it. We know that 99.99 per cent of the time it’s safe, the calls we make are unnencessary, putting keys between our fingers is as silly as it feels, that we’re more likely to hit call by mistake on the 000 we dialled than on purpose.

You might walk behind us knowing you’re not going to kill us, but it’s not like murderers have signs warning us they’re the bad guys. It’s the 0.01 per cent of times we can’t predict that we’re afraid of.

All these women died in different situations, the only common theme that they were women and they were alone. Being safe is a right. We know we can’t be guaranteed it, but that doesn’t mean we can’t and shouldn’t fight for it.

Looking back I wonder what has changed since 2012. We’ve had marches and vigils and law changes but women are still being murdered in terrible and preventable circumstances. Something more has to change. I just wish I knew what and how.’