Michelle Alexander, a New York Times columnist, goes out of her field of civil rights and pretends to know something about Israel: 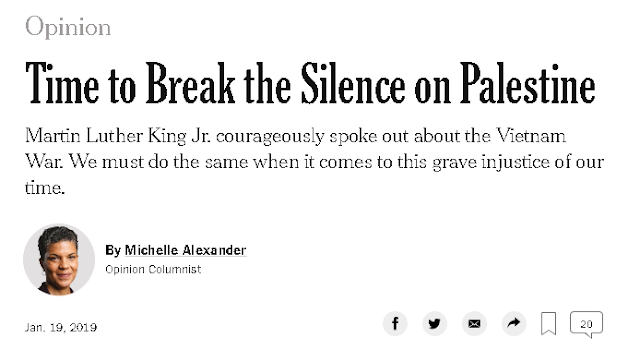 Oh? Is there silence about Palestinians? Among the tens of thousands of articles, hundreds of hours of TV time, thousands of books and scores of UN resolutions, has the world been silenced?

[I]f we are to honor King’s message and not merely the man, we must condemn Israel’s actions: unrelenting violations of international law, continued occupation of the West Bank, East Jerusalem, and Gaza, home demolitions and land confiscations. We must cry out at the treatment of Palestinians at checkpoints, the routine searches of their homes and restrictions on their movements, and the severely limited access to decent housing, schools, food, hospitals and water that many of them face.

Alexander knows nothing about Israel and next to nothing about Palestinians. I have debunked these ridiculous claims over the years.

The fact is that Palestinians could have had a state five times over – and refused. That is not Israel’s fault.

The fact is that Palestinians, after promising to avoid terror in 1993, have never stopped their terror campaigns against Jews in Israel. That is not Israel’s fault.

The fact is that Israel has a legal right to the territories that is at least as compelling as that of a people who literally didn’t exist as a people seventy years ago.

The fact is that Arabs in the West Bank have more freedom and better living conditions, better education, better health care than most of their brethren in neighboring Egypt and Jordan.

The fact is that most of the issues with Gaza are directly because of decisions made by Mahmoud Abbas in Ramallah.

If there is any silence around the Palestinians, it is around these facts which Michelle Alexander and The New York Times will rarely mention. That is the conspiracy of silence.

Her pretense that she is being brave by mentioning this is absurd. Bravery would be for her to say something honest about Israel that contradicts these tired lies and anti-Israel propaganda that she swallows whole.

But Ms. Alexander insists that Martin Luther King would agree with her:

Ultimately, King canceled a pilgrimage to Israel in 1967 after Israel captured the West Bank. During a phone call about the visit with his advisers, he said, “I just think that if I go, the Arab world, and of course Africa and Asia for that matter, would interpret this as endorsing everything that Israel has done, and I do have questions of doubt.”

Here is the entire quote:


I’d run into the situation where I’m damned if I say this and I’m damned if I say that no matter what I’d say, and I’ve already faced enough criticism including pro-Arab. I just think that if I go, the Arab world, and of course Africa and Asia for that matter, would interpret this as endorsing everything that Israel has done, and I do have questions of doubt… Most of it [the pilgrimage] would be Jerusalem and they [the Israelis] have annexed Jerusalem, and any way you say it they don’t plan to give it up… I frankly have to admit that my instincts – and when I follow my instincts so to speak I’m usually right – I just think that this would be a great mistake. I don’t think I could come out unscathed.

King was talking primarily about his reputation. He wanted to maintain support from the Arab and African worlds, and his main reason to cancel the visit was because of how it would hurt his standing, not any moral stance.

Yes, he had doubts about Israel capturing territory, and he did say that he felt that Israel should return territory for peace. And – it did exactly that, with Egypt. It also gave Palestinians land where they can live autonomously, and the result was not peace, but more terror.

Sorry if those actual, provable facts are too inconvenient to mention.

Alexander quotes a rabidly anti-Israel historian as “proof” that King would have been anti-Israel today. But if you look at the last words he publicly spoke on Israel, at the Rabbinical Assembly on March 25, 1968 a week before he was assassinated and nearly a year after the “occupation,” this is what he said:

On the Middle East crisis, we have had various responses. The response of some of the so-called young militants again does not represent the position of the vast majority of Negroes. There are some who are color-consumed and they see a kind of mystique in being colored, and anything non-colored is condemned. We do not follow that course in the Southern Christian Leadership Conference, and certainly most of the organizations in the civil rights movement do not follow that course.

I think it is necessary to say that what is basic and what is needed in the Middle East is peace. Peace for Israel is one thing. Peace for the Arab side of that world is another thing. Peace for Israel means security, and we must stand with all of our might to protect its right to exist, its territorial integrity. I see Israel, and never mind saying it, as one of the great outposts of democracy in the world, and a marvelous example of what can be done, how desert land almost can be transformed into an oasis of brotherhood and democracy. Peace for Israel means security and that security must be a reality.

On the other hand, we must see what peace for the Arabs means in a real sense of security on another level. Peace for the Arabs means the kind of economic security that they so desperately need. These nations, as you know, are part of that third world of hunger, of disease, of illiteracy. I think that as long as these conditions exist there will be tensions, there will be the endless quest to find scapegoats. So there is a need for a Marshall Plan for the Middle East, where we lift those who are at the bottom of the economic ladder and bring them into the mainstream of economic security.

His plan for the Arabs sounds a lot like – Benjamin Netanyahu’s.

But that little fact is what is being silenced, as black people today are being told that being anti-Israel is a necessary position in their own civil rights movements.