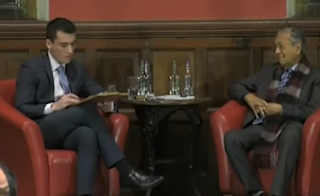 Malaysian Prime Minister Dr Mahathir Mohamad addressed the Oxford Union on friday, and he said his normal nonsense about why he doesn’t want Israelis to enter his country.

What struck me was two of his statements that generated applause from the audience.

At 1:56, Mohamad justifies insulting Jews as a freedom of speech issue:

We talk about freedom of speech and yet you cannot say anything against Israel, against the Jews. Why is that?  So if we….can say that we are something that will be regarded as anti-semitic by the Jews that is their right to hold such opinion of me. This my right to tell them also that they have been doing a lot of wrong things.

The liberal, enlightened students at Oxford applauded the idea of negatively stereotyping entire groups of people.

Well, not really – they only applauded the idea of negatively stereotyping Jews.