The Iraq-born  Israeli writer Eli Amir ignited a touch of drama yesterday when he questioned another Iraqi Jew’s wish to return to his country of birth. 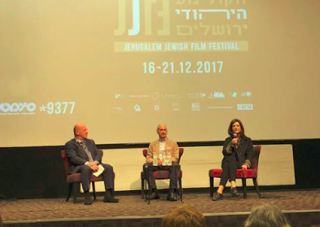 The opening sequence of ‘ Remember Baghdad’ features Edwin Shuker getting ready to leave London on his way to buying a home in Erbil, northern Iraq. He wanted to do so in order to preserve the link between his children and the land of his ancestors.

After seeing the film,  which had its premiere yesterday at the Jerusalem Cinematheque, Eli Amir strode onto the stage , took the microphone and lambasted Edwin’s project.

” Why do you want to go back? For what? For whom?” He demanded.” For Saddam Hussein? For General Aref? For General Kassem? We have no place in Iraq.”

The author, who has dedicated his writing career to chronicling the life and times of the Jews of Iraq and the difficulties of their immigration into Israel, said that he had been invited to go back to Iraq following the publication of his book The Dove Flyer to make a film there. He refused the offer.

Edwin Shuker defended his dream: it might someday become reality. “Who would have believed,’ he said, “so soon after the Holocaust, that Berlin might again become a thriving centre of Jewish life?”

In any case it was impossible for Edwin to reach his new house at present, as all transport links to Kurdistan had been cut since the ill-fated September referendum on independence.