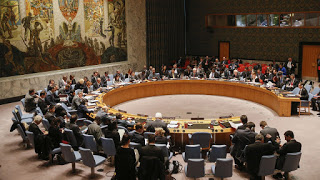 
The United Nations Security Council is expected to vote on an Egyptian draft resolution Monday that “calls upon all States to refrain from the establishment of diplomatic missions” in Jerusalem, after U.S. President Donald Trump recognized the city as Israel’s capital.

The one-page draft resolution reviewed by Bloomberg News “demands that all States comply with Security Council resolutions regarding the Holy City of Jerusalem, and not to recognize any actions or measures contrary to those resolutions.”

The resolution is symbolic since the U.S. has a permanent veto on the 15-member security council and Nikki Haley, the U.S. ambassador to the UN, is expected to vote the measure down. By forcing the U.S. to use its veto, though, Egypt and other countries are attempting to isolate Trump on the world stage.

The Security Council condemned Trump’s decision to declare Jerusalem as the capital and begin moving the U.S. embassy there from Tel Aviv by a vote of 14-1 on Dec. 8.

The Egyptian resolution does not mention the U.S. or Trump by name but expresses “deep regret at recent decisions concerning the status of Jerusalem.”

I don’t have the text of the resolution beyond what Bloomberg quotes, but it appears to be mostly a restatement of UNSC 478 from 1980 with an important distinction.

UNSC 478 does not call for all states to withdraw embassies from Jerusalem. It calls on “Those States that have established diplomatic missions at Jerusalem to withdraw such missions from the Holy City.”

This draft resolution “calls upon all States to refrain from the establishment of diplomatic missions” – but it does not call on states that already have such missions to withdraw them, as UNSC 478 did.

So the member states of the UNSC are not being even-handed. They want to maintain the Swedish and Belgian and French and British and Italian and even American consulates in Jerusalem, even though those misions violate UNSC 478 explicitly – because they serve Palestinians. The draft resolution today pointedly ignores that part of 478 calling for withdrawal of all missions and restates it to only apply to the US plan to establish a “diplomatic mission”  that would serve Israel.

What the practical implementation of 478 and this draft resolution do is specifically to deny the rights of Israeli Jews to Jerusalem while affirming Palestinian rights to the city.

The UN is seeking to do exactly what it claims it is trying to avoid – prejudging the outcome of negotiations,.

The message from the UN is clear: Jerusalem is “Palestinian.” All of it. Palestinians have veto power over Israel having any sovereignty over the holy city but Israel has no such similar power in terms of who can establish or maintain diplomatic missions for Palestinians in the holy city.

Language is very important in diplomacy. This resolution, which will gain a huge majority of the UNSC vote before the US vetoes it, shows that you only have to dig a tiny but under the surface to see that the UN happily will use bland, diplomatic language to isolate and demonize only Israeli Jews and those who show support for them.