Last Thursday was World Refugee Day. And according to the United Nations page devoted to this commemoration, every minute 20 people leave everything behind to escape war, persecution or terror. I am one of those people, declares Miriam Shepher in this JTA piece. (With thanks: Ralph) 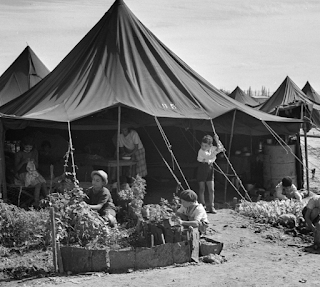 Refugee tent  in a ‘ma’abara’ in Israel

In 1948, when I was 6 months old, my mother risked everything to escape Tunisia with my siblings and me in search of a better life. My father stayed behind until he could meet us years later at our final destination. We crammed into a ship called the Negba and endured a difficult journey to France. We waited for a year until it was our turn, at last, to enter the land that my mother had always considered our home: Eretz Israel.

I am just one of 850,000 Jewish refugees from Arab countries and Iran who left, fled or were expelled from the countries where they had lived, in many cases, since the Babylonian period. In the years that followed the independence of the State of Israel, Jews in Arab countries suffered unbearable discrimination and acts of violence that led to their forced expulsion. Jews were forced out of Morocco, Algeria, Tunisia, Egypt, Libya, Iraq, Yemen, Turkey, Lebanon, Syria and later Iran. They left behind their property and belongings, carrying only necessities as they escaped to safety.

Entire Jewish communities were wiped out, and centuries of religious customs, traditions, culture and music vanished from the Middle East and North Africa. Like my family, nearly half of these refugees settled in Israel. Our stories remainlargely untold. Many still do not know of our collective trauma.