Puma, the leading international sponsor of the Israel Football Association, is the latest brand targetted by the BDS movement, and yesterday, 6 October, Inminds staged a demo outside the Puma store on Carnaby Street, which didn’t go quite according to plan.

For there to wave the Israeli flag and denounce the “monstrous lies” emanating from the hate-mongers, was a small contingent of Zionist activists, including the stalwart Jonathan Hoffman.

At one point Mr Plod approaches one of the pro-Israel counter-protesters, and seems to remonstrate with him.

But then, just as Sandra Watfa (David Collier’stake on her below) launches into her customary Israel-denouncing rant, she is suddenly surrounded by the Zionists, who virtually drown her out with repetitive cries of “Terrorist supporters off our streets!” 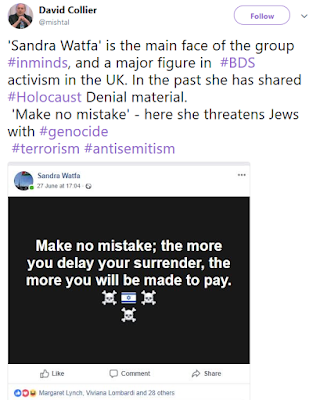 Fangs as sharp as any puma’s are bared on both sides, Ms Watfa’s script flies from her hand, Mr Hoffman is manhandled, a burly security guy speaks to him sharply and is told “She hit me first!” and later “She’s an anti-Jewish racist!”

A far cry from the groovy image of Carnaby Street back in the flower power “Make Love Not War” era of the 1960s.

Kudos to the Zionists for deciding not to let the Israel-demonisers have the pavement all to themselves!