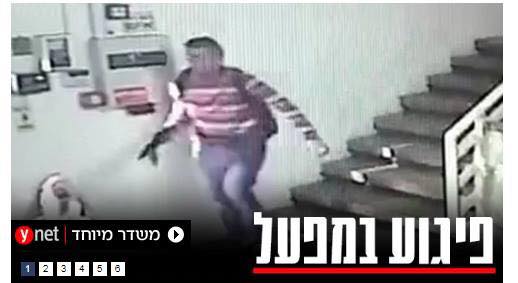 The news is horrifying. An execution-style murder for “Palestine.”

A man and a woman in their 30s were pronounced dead after being critically wounded in a shooting terror attack carried out by a 23-year-old Palestinian in the Barkan industrial area in the West Bank, while a 54-year-old woman was moderately wounded.

The woman who died in the hospital was found handcuffed on the floor. The 54-year-old told the paramedics she heard a loud noise and went to check its source. After seeing her, the terrorist shot at her and she hid under a table.

Some 5,000 Palestinians are employed in Israeli-owned businesses in the Barken industrial area.

The number of Palestinian Arabs who work in “settlements” has increased over the years, according to the Palestinian Central Bureau of Statistics some 20,000 Palestinians now work in the “settlements” (despite threats to such people by the PA years ago) and over 105,000 more work for Israelis within the Green Line.

Given this information of how much better off Palestinians are economically when there is less terror and more opportunities to work in Israel, one would think that ordinary Palestinian Arabs would be incensed at a terror attack that could jeopardize such a huge portion of their economy.

I have yet to see any such reaction.

Hamas-oriented sites are filled with people are praising Allah for the attack, and Fatah is bragging that this is proof that settlements will never be secure from terrorism.