A large fire erupted on Saturday night in the southern town of Ein Habesor after an incendiary balloon from Gaza landed in the area.

Several teams of firefighters, as well as security officials and local farmers, are working to prevent the fire from spreading to local greenhouses.

On Monday, incendiary balloons ignited five fires in the Gaza border area, which serves as one of Israel’s main agricultural areas.

At the beginning of September, it was estimated that Gazan terrorists sending incendiary kites and balloons had burned 30,000 dunam (7,413 acres) of Israeli land and caused ten million shekel ($2,754,821) in damage.

Arabs purposefully set fires all over Jewish-owned lands in Palestine for a very long time. Here is only one of dozens of articles about it, this from 1938: 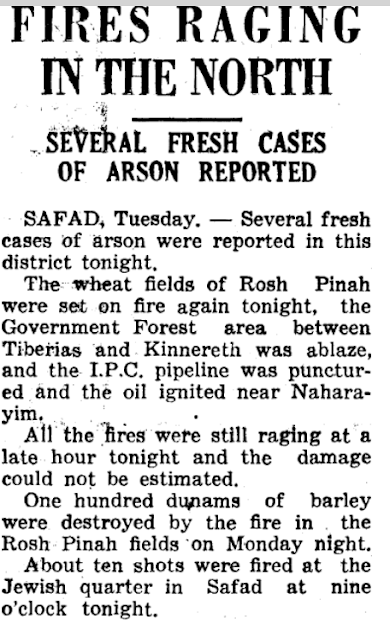 Sometimes the fires were set as a stage for more deadly attacks:

There’s nothing new – except that now Jews can defend themselves and fight back.

Which is the only reason why things aren’t nearly as bad as they were in the 1930s.