Dozens of families of Yemenite Jews who say their children were taken from them by Israeli authorities in the 1950s are filing a class-action lawsuit demanding millions in reparations from the State of Israel and the Jewish Agency, Channel 10  has reported. (With thanks: Lily) 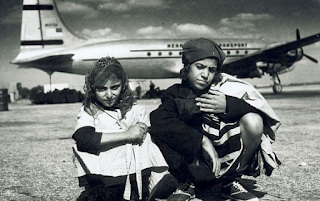 The lawsuit seeks to force the state to accept responsibility for at least 69 infants known to have disappeared from public institutions such as hospitals and day care centers.

Some 49,000 Yemeni Jews were brought to the nascent State of Israel in Operation Magic Carpet in 1949-50. Since the 1950s, more than 1,000 families — mostly immigrants from Yemen, but also dozens from the Balkans, North Africa, and other Middle Eastern countries — have alleged their children were kidnapped from Israeli hospitals and put up for adoption, sometimes abroad, in what is known as the Yemenite children affair.

Disputed by scholars and seemingly refuted by three state commissions that examined the affair and concluded that most of the children had died, the case has kept resurfacing, not least because most of the families were not given their children’s bodies or informed of their burial places.

More about the Yemenite Children Affair