Yesterday I was physically attacked at an anti-Israel protest at Kings College London. I emerged relatively unscathed, but a demonstrator clearly intended to deprive me of my camera. He rushed at me and tried to grab it and run. The force of the attack had left me with slight friction burns on my hands and a broken tripod. Just a few minutes earlier, another demonstrator had attacked pro-Israeli activist Harry Markham from behind, trying to take his Israeli flag. He was also unhurt, but his flagpole was destroyed.

The event and the protest

Inside KCL was an event being jointly held by Israeli societies on KCL & UCL. The speaker Eyal Dror oversaw the operation ‘Good Neighbour’. It helped Syrians near the border who had been caught up in the Syrian civil war. More than 7,000 Syrian’s were treated in Israeli hospitals, His team also led the evacuation of the White Helmets.

Eyal Dror is currently on tour with ‘Stand With Us‘. Tonight he is at Warwick where they are also expecting protests. The man is a hero and the episode of Israeli humanitarian activity during the Syrian civil war is a story that should be heard. Which is exactly why the anti-Israel activists are protesting him. They don’t want the world to hear the truth.

A protest was arranged online. Three years ago there was uproar over the speech of a Wanstead schoolgirl. Well she is no longer a schoolgirl nor so innocent. It seems as if she is now a major player on the anti-Israel scene. Here she is, inside the toxic antisemitic group Palestine Live, calling for people to attend the emergency protest at KCL: 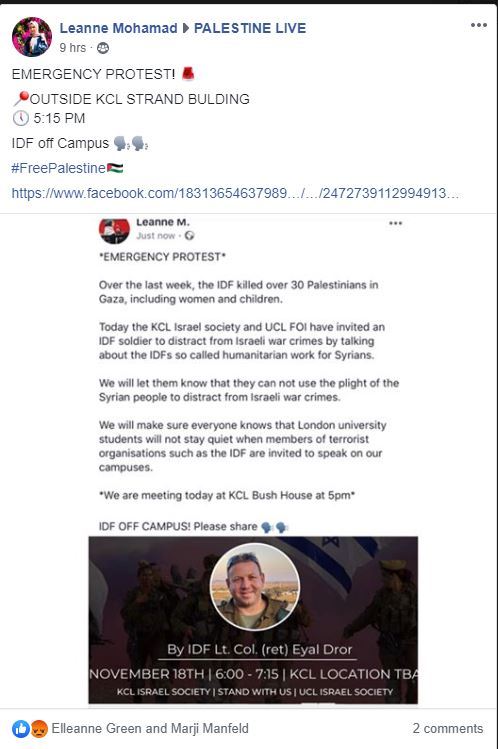 I got to the campus early as I always do and watched a crowd of soon-to-be protestors gather a little way down the road. For a while I thought some were going inside and they may have been planning a co-ordinated action, but as it turned out, almost no hostile activists attended the event itself and it passed peacefully.

The protestors then made their way to the front of the building, unfurled a few banners and began to chant ‘from the river to the sea’. If anyone is not clear about what this means, at one point the ‘student’ with the megaphone said ‘we want the Israelis gone, we want our land back – from the river to the sea‘ – which is an even more explicit and undeniable call for the total destruction of Jewish life in the region.

Harry Markham, a pro-Israeli activist had arrived to counter the demonstration. With him were two others in support, Sharna Kinsley and Rakhél Dobrik. The crowd was mixed. About 60 anti-Israel activists in total. There were clearly many students, but older, far more professional agitators, were also present – winding up the crowd.

Two female students went towards the entrance to the building, thus coming at Harry from behind. One of them grabbed at the flag, breaking the flagpole. The accomplice stood by smiling. So nobody can suggest this was the violent act of just one or two individuals, note that in the footage of this event, the crowd cheer in support. The security team simply escorted her back into the demonstration – and within a minute of destroying property, she was chanting ‘from the river to the sea’ as if nothing had occurred.

A short while afterwards, even though I was not aware of it, a male demonstrator had edged towards me. He looked at me a few times, then ducking low, he made a grab for my camera. It is an expensive piece of kit and I was lucky I was holding the tripod firmly. He had the camera in his hands and tried to run. My hands burnt slightly from the grip but there was no way I was letting go. A few security guards tried to drag him away and eventually he released his grip. The camera was undamaged, but the tripod had been ruined.

A KCL discussion with anti-Israel activist

After I was attacked, another protestor came up to me. He asks me what I do. He clearly knew. I get told the reason I was attacked was because the students don’t want me filming. At which point he says that if I upload the videos I will be doing so ‘out of context’. What context I ask – I was attacked. ‘Yes’ he says, but because you are filming students. So I ask why Harry was attacked, ‘because of the sh*t he says’ came the reply.

This level of discussion is not new to me at all but should be looked at long and hard by anyone foolish enough to think this isn’t fascism in action. Even the accusation of ‘filming without consent’ is absurd. They have attended a public demonstration – I need no consent whatsoever to film them. Their anger at my filming and their personal justification for their own violence against me – is all just about me doing something perfectly legal that they don’t like. In their eyes I deserve to be attacked because I have crossed ‘red-lines’ they have invented. Harry deserved it too because their call for free speech doesn’t extend to Jews who disagree with them about Israel.

The failure of the security guards

The crowd edged ever closer, until eventually they were standing right in the face of Harry Markham. They kept pushing their smartphones, with the flashlight activated in front of our cameras so we couldn’t film. During the protest several became verbally aggressive with Harry. This should not have been allowed to happen. The security had a duty to maintain order, not just protect the building. If they felt it was not their duty to provide cover for us – then they should have called the police. Elements in the crowd were visibly aggressive and this lack of control exploded into violence on more than one occasion.

I have presented evidence above of those who turned violent. In truth their identities should already be known to the authorities at KCL. On both occasions, the security staff witnessed the violence and on both occassions they had their hands on those responsible. If after witnessing this violence and knowing who they were, the security staff CHOSE to let these people just walk away – I want to know why.

After I was attacked, I tried to move to safety on the stairs, the security staff wouldn’t let me – pushing me back towards the now-violent crowd. I asked them to call the police – they wouldn’t -so Harry Markham did. The police arrived. After a while we were offered an escort out of the area. The students came out of the event from another exit and after some songs of defiance we walked off as a group. We were advised to so as not to present easy targets for those who wanted to attack us when there were no security or police around.

The failure of academia

How we have arrived at this point, where unjustified and racist hatred is somehow given legitimising breathing space is all down to more than just the cowardice of the universities. A time in which London becomes a city that Jews need to move around with police protection.

Parts of academia helps to stoke the racism and hate in the first place. Those academics should understand – that the Jews are only the primary and convenient target. They are total fools if they do not understand that their own freedom is at risk. What is taking place now in London in 2019, is only going to get worse. At some point this fascism will have to be confronted. History has taught us it is far better to do it sooner rather than later.

This blog is unique and I engage in deep undercover research into anti-Jewish hatred, anti-Zionism and anti-western extremism. As this particular blog on the textbook shows, we have to find this distortion everywhere that it is hiding. It is poison. Your support really does make all this possible. The work is fully independent, and I have uncovered many stories on this site that have created headline news across the globe. I was recently named as one of the J100 (‘top 100 people positively influencing Jewish life’) by The Algemeiner.  If you can, please consider making a donation towards the ongoing research.

You can make PayPal donations using the donate button above. I have also opened a Patreon page that gives the opportunity of small monthly donations.