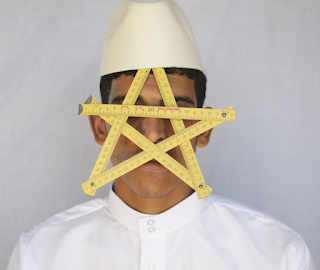 The Jerusalem Biennale international art exhibition is happening now, and one of the exhibits is causing an uproar in Morocco.

The exhibit, Ziara, for the first time shows art by Moroccan Jews and Muslims together, under the theme of (roughly translated) “journey.”

He wrote that  the participation of Moroccan artists in this show “challenged all national and cultural values, and is undoubtedly an outrageous event.”

Socrates believed that art must induce virtue, that is, it must have moral value. It means that art is not the mere coloring of the paint on the cloth, but is a continuous relationship between morality and reality; between consciousness and reality, through an open mind, capable of absorbing cultural, human, moral and social values.

For the sake of its values, the Arab artist is now aware of his society and identity, which means that there is a strong cultural, religious and cultural connection between these values ​​and the issues surrounding him and his life, the most important of which is the

Palestinian cause and the Zionist project that seeks to keep the Arab region weak, disjointed, divided and backward.

How can those who belong to Arab art allow themselves to disregard all the values ​​in order to share the murderous Zionism with its plastic connection to occupied Jerusalem, and normalize the relationship with the Israeli enemy outside all moral and religious values ​​and endowments …?

We do not know whether these artists know that normalization with Israel is a surrender to the Zionist entity of its right in the occupied Arab land, the right to build terrorist settlements, the right to destroy Palestinian villages and the displacement of its people, and is alsoto  accept the ugliest levels of humiliation and the abdication of dignity and rights.

They have departed from the principles, objectives and ideals of the group, which requires bringing them to justice to hold them accountable for this heinous act.

Most of the responses to this op-ed are surprisingly pro-Israel!

It is very strange when you read in an article such as this article from a professional thinker who fears the Zionist project.  The Arab nation itself was not torn by the Zionist enemy, but on the contrary this enemy reaches out to live in peace. Israel lives on an inch of land among millions of square kilometers (of Arab land), which has made Israel the eternal enemy for an inch of the earth.  Only God knows if the Jews have the right to that inch of the earth, because the Arabs use emotions and have no historical or legal arguments when they claim that Jews are strangers in the region…

Our intellectuals are strange.
Why do you link the subject of values ​​to land has always been the subject of religious conflict?
Wasn’t the area owned by the Jews before it was conquered by Muslims?Wasn’t the city in Saudi Arabia the property of the Jews (the sons of Al-Qenaqa, the sons of Fereida and the Jews of Khyber) before they were invaded and their property stolen and the men were killed and their women and children were exiled by Muhammad and his companions? What values ​​are you talking about, sir?


The Palestinian cause is promoted by those who are far away from it as if it is the closest problem to them, yet the Palestinians themselves believe that the solution is to guarantee them the pride, the jobs, their future and their full rights. There is no reason to commit suicide for the sake of the Palestinians.