One of the best institutions of higher education in the Arab world is violating American law by not letting Israelis sign up for its online courses, according to a complaint filed Friday to the New York City Commission on Human Rights.

Israeli activist and attorney Yifa Segal said she was unable to sign up for a global health program with the American University of Beirut because the signup screen didn’t include Israel as a nationality option. She tried to enroll not because she is interested in global health, but because she knew she would likely be unsuccessful, and wanted to challenge the school on legal grounds.

Lebanon doesn’t recognize Israel and forbids its citizens from even speaking with Israelis, so it’s not surprising that AUB wouldn’t let Israelis take its classes. But while AUB’s campus is in Lebanon, it has an office in New York City. It is recognized by the New York state government and the regional university accreditation authority. The complaint accuses the university of violating New York City laws. Experts consulted by the Forward said the school might be violating state and federal laws as well.

“You can’t come in from China and offer a program to whites only,” said Professor Peter F. Lake, director of the Center for Excellence in Higher Education Law and Policy at Stetson University.

Here is the full text of the complaint provided to me by David Abrams, one of the lawyers that filed the complaint:

1. I, Yifa Segal am an Israeli national and human rights activist. I am associated with the International Legal Forum, which is an Israeli organization dedicated to promoting peace, justice, and equality in the Middle East.
2. I regularly travel to New York and in fact I intend to visit New York in December.
3. I understand that Respondent American University of Beirut (“AUB”) is a New York university with its main campus located in Beirut Lebanon. I understand that AUB regularly holds events at its “Debs Center” in New York.
4. AUB maintains a Global Health Institute (“GHI”) which offers online courses and diplomas through its GHI Academy. These courses and diplomas are offered to the general public and many of them concern matters of interest to me.
5. For example, there is a course in Humanitarian Law and Human Rights; a diploma in Humanitarian Leadership; and various offerings which concern the Middle East and North Africa region, which is of course where I reside.
6. I understand that all of these courses are offered to the general public.
7. The next time I am in New York, I would like to register for and participate in such a course.
8. To be clear, I am motivated in large part by my desire to fight against boycotts of Israel and to break down barriers against Israeli participation in international trade and cultural exchange. Nevertheless, I stand ready willing and able to take one of the Defendant’s online classes if I am permitted to.
9. Accordingly, I attempted to register with the GHI Academy however the online system asked my nationality but there was no choice on the menu for “Israeli.” Thus, I was unable to complete the online registration form.
10. I sent e-mails to AUB requesting, among other things, that this problem be fixed and that I be permitted to register however I received no response.
11. I understand that there is a lot of anti-Israeli sentiment in Lebanon and I believe that for this reason AUB has decided to discriminate against Israeli nationals even though it is a New York university with its headquarters in New York.
12. I respectfully submit that as a provider of public accommodation in New York, it is impermissible for AUB to discriminate in this way against Israeli nationals.
13. Accordingly, I charge AUB with unlawful discrimination on the basis of citizenship and national origin.
14. I also charge AUB with taking part in a discriminatory boycott.
15. I have not commenced any other civil or criminal action, nor do I have an action pending before any administrative agency under any other law of this state based upon this same unlawful discriminatory practice.___________________________________

Interestingly, AUB claims to have a non-discrimination policy that applies to Lebanon as well as the US. I could not find where it applies to admissions, however. 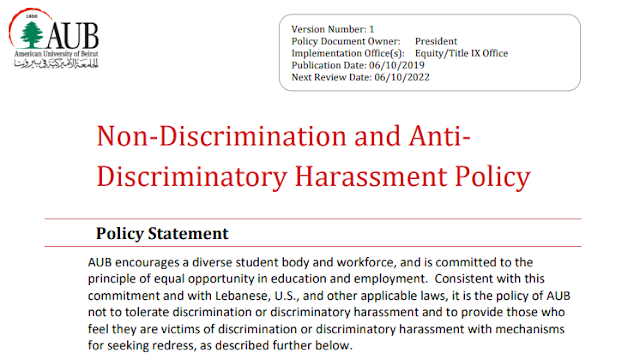