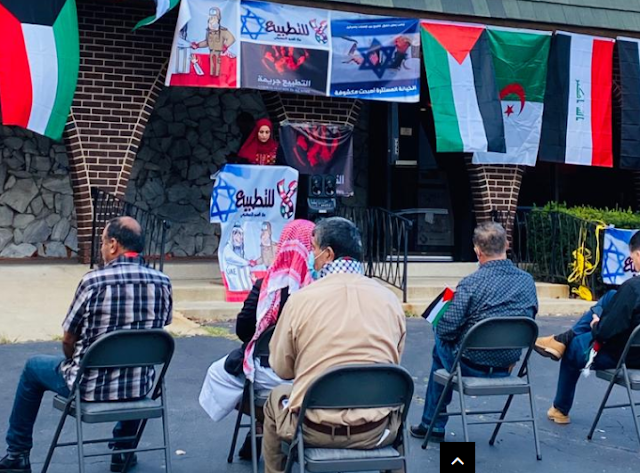 On Sunday, a group of Arab American organizations held a sparsely attended event in Chicago protesting normalization between Israel and the UAE.

Video of the event indicates that all of the speeches were in Arabic, which is probably why this rally received next to no attention. But the official Palestinian news agency Wafa covered this extensively, to give the impression that Palestinians are still a major issue for the larger Arab world.
The final joint statement, as translated by Wafa, is insane.

A joint statement, in the name of the participating Arab communities, was read by the Palestinian National Council member Ghassan Barakat, at the conclusion of the meeting held in Chicago. The institutions warned of the repercussions of this agreement on the stability of the region, saying: “The shameful agreement will pave the way [for Israel] to devour the entire Arab region, and the occupation has a new means of penetration into the Arab world.
Representatives of social, service, charitable and religious institutions representing the Palestinian, Egyptian, Yemeni, Iraqi, Libyan, Tunisian, Algerian, Syrian, Kuwaiti, Jordanian, Moroccan, and Lebanese communities participated in the meeting.
In the joint statement, they praised the steadfastness of the Palestinian people in the face of attempts at normalization and deception practiced by the occupation state, under the illusion of peace that targets all capitals of the Arab region, to bring them to their knees, humiliate them, and plunder their wealth.
The statement said: “The agreement rewards the occupation state by acknowledging its full control over the land of Palestine, and its recognition of Jerusalem as the capital of the Jewish state, and paves the way for compromising the Al-Aqsa Mosque and Judaizing it, which is not and will not be accepted by any free Arab, especially since Jerusalem is the path of our honorable Messenger Muhammad, may peace and blessings be upon him.”

Imagining that Israel is using peace as a means to take over the region is crazy enough. But the underlying assumption behind it is really interesting, if you think about it.
These Arab American self-declared leaders are saying that every single Arab nation is run by idiots who will be fooled by the brilliant, diabolical Jews into giving up all of their land and natural resources.
The more that the “pro-Palestinian” side insults every Arab nation, the more likely they are to throw the Palestinian issue under the bus and make peace with Israel.
Their self-destruction is really something to see.