Previous to taking up that post Evans had been a career diplomat.  To quote his obituary in The Times of 19 April 1974, he was


“one of the most accomplished Arabists in the Foreign Service, and by virtue of his understanding of and sympathy with the Arabs, had been able to fill with distinction a number of different posts in Arab countries.  Born in 1913, he was educated at Cowbridge and Balliol, where he graduated in 1934, later taking a doctorate of philosophy at Hamburg.  In 1937 he entered the Levant consular service, and after two years learning Arabic at Beirut, and a spell at Alexandria,he spent from 1941 to 1945 at the Embassy in Cairo. For much of this time he was private secretary to Lord Killearn, for whose forcefulness he conceived a strong admiration, and whose wartime diaries he was, 30 years later, to edit for publication. In 1945 he became British consul at Damascus … and later served successively at Aleppo, Beirut, and the Forign Office.

In 1952 he returned as oriental counsellor to Cairo, where the Nasserite revolution had just ousted King Farouk; four taxing years of servicethere were ended by the Suez adventure of 1956.  After two years at Berne, he became in 1959 consul-general at Algiers…and in 1962 … he was appointed the first British ambassador to the new [Algerian] state. In 1964 he was transferred as ambassador to Damascus, and in 1967 to Baghdad…  In 1969, after some soul-searching, he resigned from the Foreign Service to fill the chair of international politics at the University of Wales.”

This series of tweets, by an academic at the same department at Aberystwyth interesting. 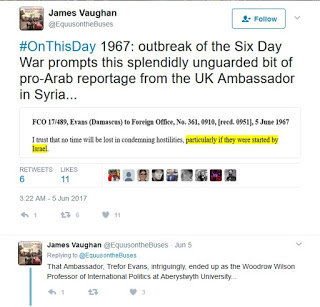 Fossilised it may be, but that wee dropping of Evans’s is oh so typical of the Foreign Office “Camel Corps” mindset that continues to infest the FCO to the present day.

And what effect and legacy had Evans, one feels entitled to ask, over the young minds he encountered at a department generally conceded to be the top one of its kind in the United Kingdom, and who may have become diplomats, journalists, or academics in their turn?