Once again, it shows that the conventional wisdom is wrong: the Likud government that is routinely described as “the most right wing government in Israeli history” was willing (for whatever reason) to accept a far-ranging and potentially self-damaging “peace” plan with the Palestinians – and the “moderate” Palestinian Authority said no.

Here is Haaretz’ summary of its very detailed reporting. 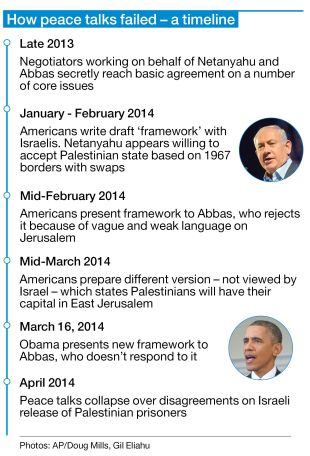 When Kerry met Abbas in Paris on February 19, 2014 and presented him with this version of the framework accord, the Palestinian president responded with anger and disappointment. Former U.S. officials say his biggest concern was with how the document addressed Jerusalem. The weak wording on this paramount issue was a nonstarter for him.
As a result of Abbas’ reaction, the U.S. team realized that in order to get a “yes” from the Palestinian president, they would have to change some parts of the framework document. The challenge was how to do it without losing Netanyahu, who had verbally expressed his openness toward the February version of the document (although he never accepted it in writing).
Abbas was scheduled to meet President Barack Obama in the White House on March 16, 2014 – less than a month after his dinner with Kerry in Paris. Ahead of that meeting, the U.S. peace team crafted an updated version of the framework, which, unlike the February document, was not pre-negotiated with the Israelis. The result was a different document, one that on a number of issues was tilted more toward the Palestinians.
After failing to first negotiate a document with Netanyahu and then get a “yes” from Abbas, the Americans now wanted to test the opposite option: Getting the Palestinian leader to agree to a document on the core issues, and then take it back to Netanyahu. But Abbas didn’t accept Obama’s framework document. He didn’t reject it, though – he simply didn’t respond.The Obama administration was disappointed and frustrated by his reaction. Obama asked Abbas to “see the big picture” instead of squabbling with “this or that detail” – to no avail. A month later, Kerry’s peace talks collapsed.

Haaretz tries to spin this as best it can to fits its narrative, saying that Netanyahu has lied to the public about the extent of what he was willing to give up for peace and trying to justify Abbas’ rejection of the plans.

But the facts that they uncovered cannot be spun: the “moderate” Palestinians have twice again rejected formulas for peace while Israel has shown amazing flexibility to end the conflict.

There are scores of articles this week in major media  decrying “50 years of occupation” – but the fact is that Israeli leaders, both left and right, have proposed and accepted peace deals throughout the entire five decades which would end Israeli rule over disputed territories, and Palestinians have rejected every single one either directly or indirectly.

John Kerry knew this more than anyone – and yet in December gave a speech that blamed Israel alone for failure of peace in the Middle East.

The anti-Israel narrative will not be scratched by the supposed “peaceniks” who will attack Israel as intransigent and praise the Palestinians as victims regardless of the facts. There will be no breast-beating NYT op-eds about how Palestinians missed another opportunity for peace, about how they continue to support violence, about how they have been intransigent and consistently rejected any progress towards an end to the conflict.