On 1 December the London Jewish Chronicle reminded us of the results of a poll taken before this month’s British General Election was called:

Researchers asked 2,040 people about antisemitism using a range of examples incorporated in the International Holocaust Remembrance Alliance Working Definition of Antisemitism.Questions not only included stereotypes regarding Jewish influence, money, loyalty, trustworthiness and power, but also about ideas regarding the supposedly outsized and malign influence of Israel and its supporters, and drawing comparisons of Israeli policy to that of the Nazis.

Results showed that  20 per cent of British people hold the view that “Jews chase after money,” and when the same question was asked of a sample that identified as ‘very right- wing’ this rose to 29 per cent.

And what a month for antisemitism last month alone has been.  Gathered by estimable University of Aberystwyth international relations academic Dr James Vaughan, and reproduced here from his tweets, here’s a sample of villainous old Jezza’s headlines from last month: 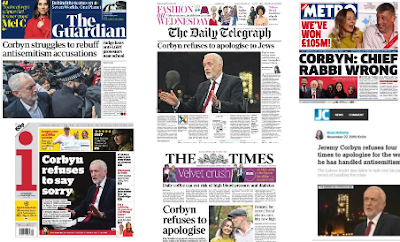 From the same source, and the same month, these examples of the British Left’s shamelessly shameful sentiments:

From another tweeter with an eagle eye for leftist malevolence: 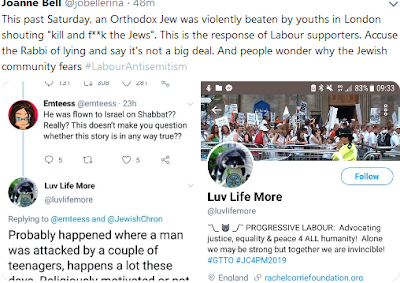 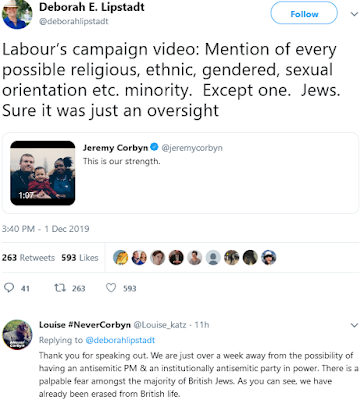 Little wonder that the admirable Anglo-Jewish actress and writer Maureen Lipman, a staunch and outspoken defender of Israel, has spoofingly reprised the role that years ago made her famous (Beattie, in a series of commercials for British Telecom), picking up the phone to tell friend Nora why after a lifetime on the Left she won’t be voting Labour this time around!