This survey by the Campaign Against Antisemitism, analyzed by an expert from Kings College London, proves convincingly that the supposedly anti-racist UK Labour Party attracts more antisemites than any other political party in Britain.

Digging into the details, we see that he survey asked seven questions of its respondents to indicate if they have antisemitic attitudes; the first five measuring positive answers and the last two negative answers.

Note that none of these questions are about Zionism and Israel – each of these exposes traditional antisemitic stereotypes.

The survey also asked about examples of anti-Zionist attitudes that fit under the IHRA Working Definition of Antisemitism. While the report didn’t break down those results by political party affiliation, the results for British people altogether are most concerning, and multiplied by those who consider themselves far-Left. The worst example:

“Israel treats the Palestinians like the Nazis treated the Jews.” 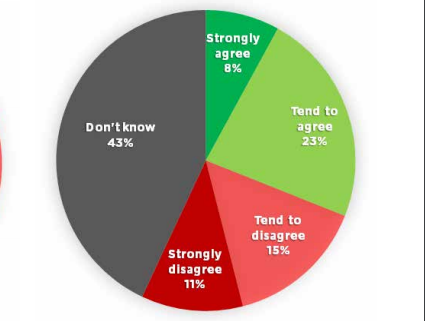 Almost one third of Britons believe that Israel treats the Palestinians like the Nazis treated the Jews, which is an explicit example of antisemitism according to the International Definition.

The comparison invokes a double standard, as there is no objective justification for the claim and other states are rarely characterised in this manner. Moreover, it associates the Jewish state with what many consider to be the most evil regime in history and, above all, the comparison draws a parallel between the state that murdered half the Jews in Europe and the state to which the survivors and other
persecuted Jews fled.

This antisemitic belief has not been captured in previous surveys, yet it is held by 31% of the British population. Merely 26% of respondents rejected the antisemitic proposition. Still more worryingly, this statement was believed to be true by a staggering 60% of members of the ‘very left-wing’ boost sample.

This is a damning survey, not only for Labour Party followers but also for how bad things are in the UK altogether for Jews.